It's not the same. As I said, the footage has been changed from the actual Movie 2 preview, but they kept the same audio and structure.
https://youtu.be/ItsAUZS2RfI

I just find it a bizarre mistake to make considering it's a trailer for a single episode and not the remaining episodes of the broadcast.

Staff member
Yeah it's an edited down version of the trailer from the second movie. They shortened it mostly by removing footage that has already aired in the Memorial Edition. It's also the same teaser that's at the end of episode 10 (I mentioned it in my post). Seems unimportant to me. It's only there to hype up the Eclipse and try to get in more viewers.

Staff member
Per the latest Young Animal, the Blu-Ray box set of the Memorial Edition will be released in Japan March 29.

I hope that won't be the only thing they'll announce for the countdown, but it's likely just that at this point.
Last edited: December 8, 2022

I'm interested if the English dub gets the original cast or goes with the 2016 cast.
L

To be honest I'd prefer if they kept Kevin Collins as Griffith. That guy just captures Griffith's nature so well.

LordYAM said:
To be honest I'd prefer if they kept Kevin Collins as Griffith. That guy just captures Griffith's nature so well.
Click to expand...

100%. He evokes charisma, culture, and poise. Plus he sings!

The 2017 guy was a raspy, sinister cliche of an evil mastermind.

That makes me chuckle, since I consider the english Void intro of 1997 anime to be as cliché sinister evil voice as it can be. I'm sticking to Japanese, nothing beats the voices of Griffith, Void, Casca and maybe even Guts for me.

Imperivm97 said:
That makes me chuckle, since I consider the english Void intro of 1997 anime to be as cliché sinister evil voice as it can be.
Click to expand...

You’re not gonna want to miss Episode 90 of the podcast. Special guest!

I'll look forward to it!

To each his own. I guess growing up in Italy with Italian dubs makes me biased against English dubs. None of them sounds convincing to me, but I really have a lot of love for a number of Italian dubs especially of the 90s-2000s era (animation and live action as well).

Staff member
The countdown was for the Blu-ray boxset's release date, in addition to hyping up the Eclipse itself.

Noteworthy: it will include the video of Miura that had been done for the exhibition. A cheap way to get fans to buy it. Cheap but definitely effective, at least in my case. *sigh*

You Get Nothing! You Lose! Good Day, Sir! (Thank god.) 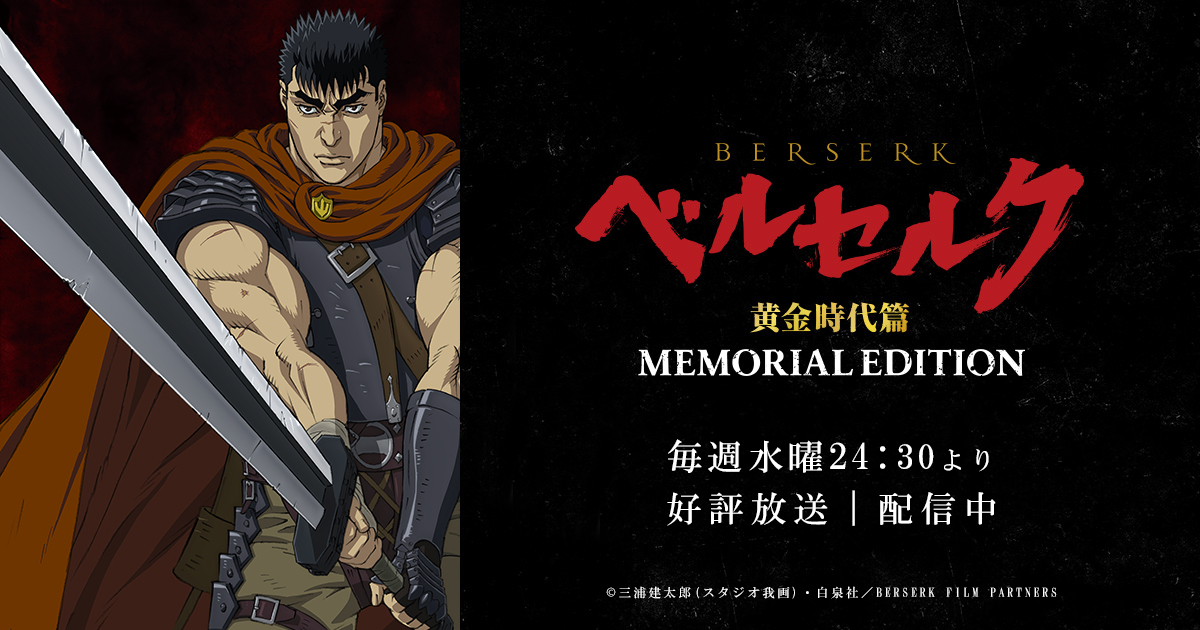 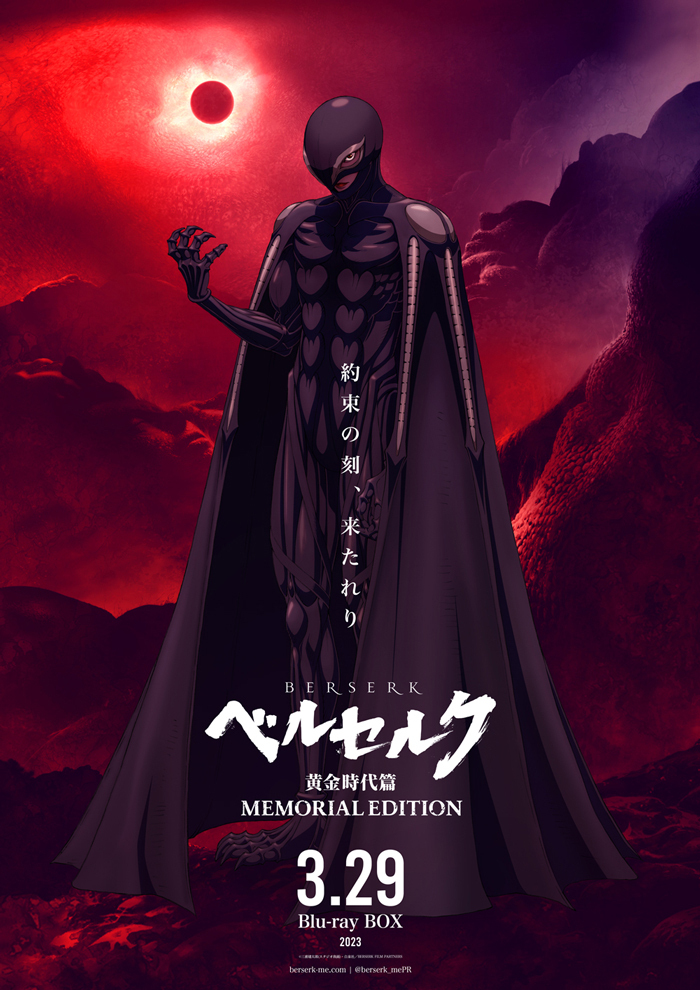 The ME is confirmed to be 13 eps long btw through the BluRay.

As expected, no new anime adaptation, and Blu-ray Box announced.
There is also a new Phempto key visual on the main page.
A nice addition to the box are the enclosed 3-CD soundtracks of the trilogy with added music for the Memorial Edition (I suppose both the Shiro Sagisu tracks and hopefully (not confirmed yet) "The Expedition" by Susumu Hirasawa).

What I really did not expect it to feature the video interview to Kentaro Miura. That's really good!
Last edited: December 10, 2022

I can hear the seething already, people were really hyping up the countdown as a build up to a new anime on Twitter and Reddit lol.

It's endlessly amusing to me to see this meltdown. People who never even once visited the site, make a screenshot of the random banner on the main page and be like "WTF is this crap?". I'm glad I don't frequent those environment any more and get updates on my own.
L

The frustration all came to critical thinking, honestly. Like why on God Hand's earth would they announce a sequel anime *before* the Memorial Edition finishes airing? Plus Studio 4C just announced that they're working on something else, so that made a sequel announcement even less likely.
But I guess manga/anime fans see a random countdown and immediately think "ANIME SEQUEL!!!!!!1!" without thinking much. On the other hand, I do think that the marketing is a little strange considering they *must* know that a new anime is what the majority of fans want at the end of the day. They *could* announce something at the end of the final episode, who knows, but my hunch will nothing will come from this.

Other than that, the fact that the interview with Miura will be included in the Blu-Ray, will make me pre-order it. That's honestly the best thing ever and I'm so excited to see and hear from Miura himself.

Episode 11 dropped.
I still need to process what I just witnessed, but why do they always end episodes on the most inapropriate places?
They could've ended episdoe 10 with the beherit's screaming and episode 11 on Casca's rape, but no. Episode 10 ended on literally nothing and this one just on Griffith approaching the altar. No cliffhanger, no big WOW moment, just in the middle of things.

Staff member
Episode 11 actually has a brief new scene that starts at 3:07 and ends at 3:55. It involves Rickert and isn't in the manga. He's in a city (presumably Wyndham), talking to a merchant about an escape route "through the mountains" and also purchases medicine while he's at it.

I guess it's a pretext so that there's an explanation for why he's not around and why he has medicine (versus it being Puck's powder in the manga). It seems a small bundle of herbs is enough to heal grievously wounded people.

It's a bit of an odd choice, since in the movies he isn't shown treating them, and we do get to briefly see Puck and the caravan he's with. Missed opportunity to tie these disparate scenes together, like they are in the manga.

There's also a new somber music afterwards that lasts up to 5:00. And at 8:30 there's a delay on a cloud passing near the sun, which adds about 5 seconds to the run time. Nothing too notable except for that, just some faces redone when the Eclipse begins. Like @cijhho123 says, it ends rather abruptly and not in a great spot (just as Griffith is raised to the giant hand). That was one of the things I was curious about, because there aren't many good moments to stop in that segment, and they fumbled it.


cijhho123 said:
They could've ended episdoe 10 with the beherit's screaming and episode 11 on Casca's rape, but no.
Click to expand...

Nah, wouldn't have worked time-wise, there was too much material to handle. What they could and should have done is end episode 10 after Guts and Casca's talk. Could have been done by skipping the intro and outro. Then you start episode 11 with Griffith's dream, and you end it right after everyone gets branded, just before the apostles descend on them. It's a tight cut, but there's just enough of a shot for it to work. Then episode 12 is the massacre, the rape and the rescue. That leaves you to start episode 13 as Guts wakes up in the cave.

The problem here is that they won't even be able to finish the Eclipse before episode 13. My guess is they will end episode 12 at either the beginning or the end of the rape (before SK intervenes), which is a pretty terrible place to cut the scene... It also means they probably didn't add a lot of new material to the last episode.

I watched a few moments of the episode. The new Rickert scene doesn't make too much sense but I guess it does fill that hole in the movie adaptation. It was some deleted material from the movie, parts of it did came out over the years. It strikes me odd how erratic some of the animations look for the shot of the merchant lol.
I'm glad they replaced some of the CG models with 2D when the Eclipse starts, the scene with Casca on the horse was really painful to look at.
As for the bits of new music aside for the new piano intro it's a track from the second movie, when Guts leaves after defeating Griffith on the hill. I noticed that for the third film the music usage is much less cohesive and organized than the first two, between reusing tracks from the first two music and fragmenting new pieces.

Dweller of the Lotus Moon

Odysseus said:
I can hear the seething already, people were really hyping up the countdown as a build up to a new anime on Twitter and Reddit lol.
Click to expand... 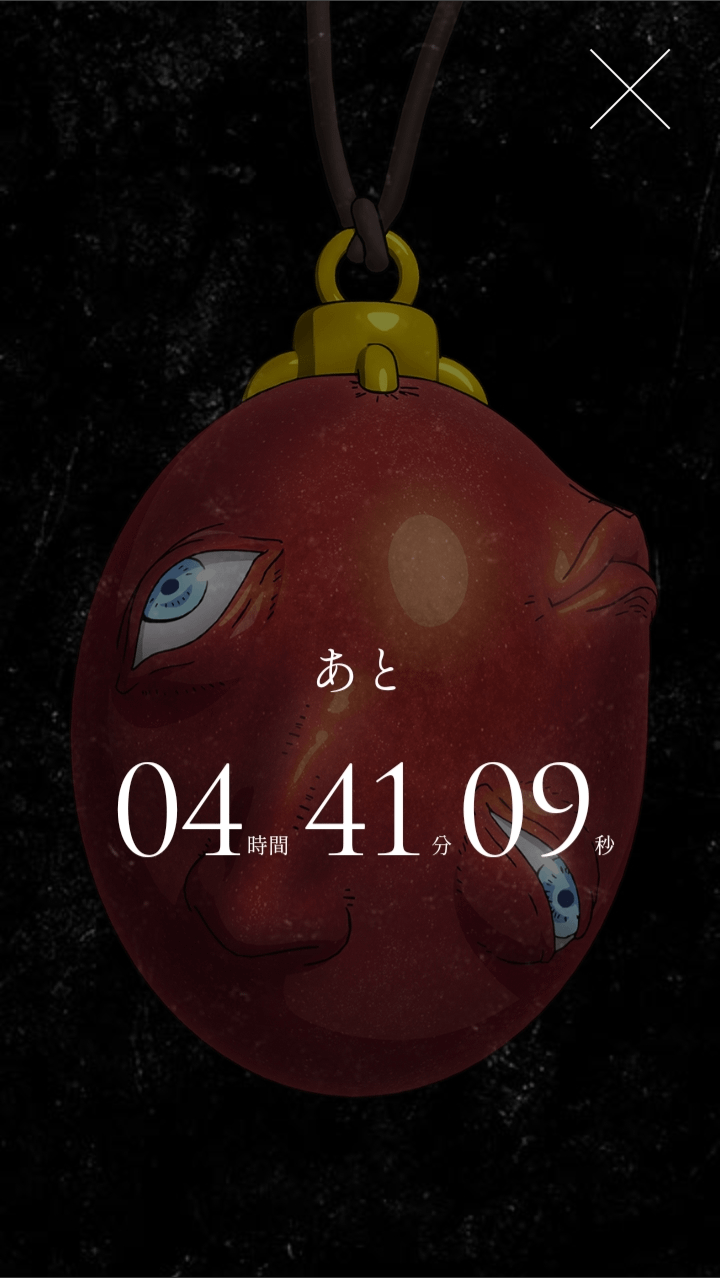 r/Berserk - The Berserk countdown is a big scam. It just indicates when the eclipse happens in the Memorial Edition. It ends the same time the next episode broadcasts, where the eclipse will happen. It's being hyped up like we haven't seen it already

Yep, saw it all over twitter as well. All the replies to the announcement tweet were angry or disappointed, and several were outright hostile. Berserk "fans" are something else.
N

ApostleBob said:
I'm interested if the English dub gets the original cast or goes with the 2016 cast.
Click to expand...

God, I hope it's the OG. Kaiji Tang's Guts was so utterly grating. I don't know what people's thoughts here are on Marc Diraison, but in my opinion, he perfectly captured the balance of introspection and rage in Guts, even with the silliness of 90s anime dubbing.

Anyone knows if the blu ray edition set to release in march will have english sub?

Bertus said:
Anyone knows if the blu ray edition set to release in march will have english sub?
Click to expand...