Looking good, looking good! As it was said ealier, the influence of Miura is clearly present. Very curious to see the rest.

Finally up on CDjapan. 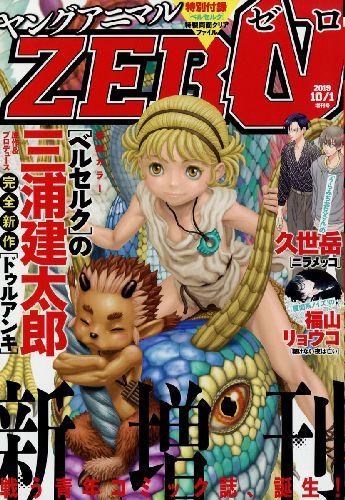 Hakusensha,Young Animal ZERO,BOOK listed at CDJapan! Get it delivered safely by SAL, EMS, FedEx and save with CDJapan Rewards!

Apparently my comment about Miura including sexualised young girls in his manga was "gratuitous and unwarranted" despite being true, despite him making a cartoon defending lolis.

But let's not disregard the delusional Stan mods, just because they're in denial of the controversial aspects of Miura's character and Japanese culture.


----------
EDIT from Aazealh: I never blame people for being mistaken about something, and generally me and Walter try as hard as we can to give members the benefit of the doubt. Of course, this will sometimes lead to abuse, like in this case: Wenliinvictus posts misleading information, and when corrected, simply ignores it. Because he doesn't care about what's right or wrong, just about loudly voicing his opinion. This isn't the first time he does it; it's always been his strategy. But it will be the last time because I've now disabled his account.

We strive to have a relatively high level of discourse on this forum. We take the time to engage with people when they are mistaken to explain why and how, and we listen and learn when we are mistaken ourselves. That is the basis of a healthy community. But there have always been and always will be folks who don't care. Who just drop their hot takes and don't give a shit about the rest. This isn't what we're looking for here. Unfortunately, the online Berserk fandom is plagued with misconceptions and has been for ages. One of our stated goals is to combat that misinformation. That means recognizing that at the end of the day, not all opinions are equal and there are such things as "true" and "false". The bottom line is that we can't allow people to assert anything they want and ignore feedback, because that is the surest way of perpetuating misinformation.
Last edited by a moderator: September 12, 2019

Technically she's not a girl, according to the interview.

RaffoBaffo said:
Technically she's not a girl, according to the interview.
Click to expand...

The character is multi gendered. It reminds me of Loki in norse mythology where he gets impregnated, but also impregnates a horse lol
Last edited: September 9, 2019

TheWillOfT said:
The character is multi gendered
Click to expand...

Wenliinvictus said:
Apparently my comment about Miura including sexualised young girls in his manga was "gratuitous and unwarranted" despite being true, despite him making a cartoon defending lolis.

But let's not disregard the delusional Stan mods, just because they're in denial of the controversial aspects of Miura's character and Japanese culture.

What's delusional is your insinuation that Miura must be a pedophile because his stories sometimes feature scantily clad young people — that's why your post was deleted. Was it really a surprise that it was removed and you were messaged not to stir bullshit up (repeatedly, in your case)?

If seeing images like those makes you uncomfortable, that must be rough for you. But I'm not sure why that has to be a reflection on Miura as a person though. As to that image you posted, I wonder if you even know the background to it, or were just looking for some kind of angle against Miura to take. In any case, here's a bit about what Miura was doing with that short comic:


Back in 2010, conservative legislators in Tokyo were considering broad legislation that would ban "harmful materials regarding the healthy development of youth". It's about forbidding works of art that depict characters under 18 in a sexual context from being sold to minors, as well as those depicting socially unacceptable things like rape. Ultimately the bill was rejected.

The brief comic (6 pages or so?) was basically Miura's visual editorial against the legislation. The concern at the time was that the bill would have sweeping implications on the manga industry; not just "loli" comics or the porn industry, but how youth are treated in manga. For example, as Miura said himself, Guts' origin story simply wouldn't fly under that legislation. How his assault as a child affected him and shaped him into who he is would not be an element of the story at all. In effect, it would restrict what manga creators can do with children in stories. And while of course that directly applies a way to criminalize comics that overtly sexualize young female characters, it also affects all series that feature young characters in general.

I've never read a full translation of this comic. I was asked to transcribe it for a translation, but I found it difficult because the font is written in a very hand-drawn sort of way. So that, on top of my lack of interest in the topic, I didn't think it'd be of much interest to most fans. But I know enough of it to understand that Miura's depiction of things is a bit tongue-in-cheek. It's like a "haha, no but seriously, consider the implications" version of his thoughts.

He was taking a stand against a law that would fundamentally alter the freedom manga artists have, the criteria for which would be determined by lawmakers behind closed doors.

this episode has beautiful art, i just had to color it,

Very nice coloring! I just ordered my copy today (while I received my ep359 the same day, yeh). Hopefully it wont take too long to get it!

I ordered the first issue but with it being like 2200 yen including shipping I’ll go digital from now on.

Sareth said:
I ordered the first issue but with it being like 2200 yen including shipping I’ll go digital from now on.
Click to expand...

I thought about that too but Im not too big of a fan of digital copy. I know I should though but the screen of my phone is small...

I'm consoling myself with the fact that its not a montly release at least. I wonder if it'll always be that price or if it was juste for the first issue?

Read two episodes and I must admit that's a pretty good manga, at least with its art and main character who is kinda cute but most importantly, very interesting! Inspirations from European pagan mythology are clearly visible, not too much, just enough and honestly I have clearly better vision what this could really be with coming continuation than in my first contact with Gigantomakhia ( masterfully drawn btw )

Staff member
Next release will be next month, I got caught looking around for the release this week

I'm excited to see more, but the start didn't exactly blow me away. I'm most interested in seeing what Miura and his team do with the setting — a story set in a time of myth, before written history, among hunter-gatherers. It's full of possibilities. Staff member
The digital edition of YA Zero issue 1 (with first Duranki release) is on sale for 90% off (71 yen): https://www.hakusensha-e.net/store/special/191101yaz?cmp=trn 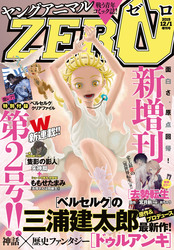 Im just gonna be glad once this is done after having seen the third episode. Pretty bad stuff

to much nude kids for my taste.

no name said:
Looks very interesting, my only problem is that i don't like how much skin we see of the young girl.
Click to expand...

no name said:
to much nude kids for my taste.
Click to expand...

Can we look forward to this hot take every issue?
L

I'm really, REALLY liking the artwork in these episodes so far. The wolves and backgrounds in particular look amazing. Pan looks extremely adorable too, dare I say one of the cutest mascots in manga I've seen?
I think my only critique is that in a couple of panels there's too much variation in line thickness which reduces the sense of depth. Also, nudity aside, I feel like some of Usum's poses appear a little too sexually suggestive, like in this episode's page spread; the boys are drawn standing straight up naturally, while Usum's drawn arching their back almost 90 degrees, so you can get a full view of their butt. I don't mind the nudity overall but in my opinion it would look more tasteful if Usum were drawn in more natural poses.

ANYWAYS, looking forward to how the village looks next episode. If this is the level of artwork Miura and his staff can achieve in future Berserk episodes, I'm very excited for it (and Miura should be proud of his assistants)!
Last edited: November 9, 2019

Walter said:
Can we look forward to this hot take every issue?
Click to expand...

The art of this manga is very pretty, I'm really excited for more!

I'm also very excited for Berserk's return, cause imho these 3 episodes look even better than some of the latest Berserk episodes.

Berserk will surely come back looking better than ever.

I need to read all that, but I really miss Berserk...

Did anyone read the Chapter 4 of Duranki? I thought it was pretty good. On page 6 the two fathers of Kirta's retainers remind me of Judeau and Pippin. It's like they both died in the Berserk Universe and ended up in the Duranki one.

Staff member
Four releases in, I feel like this might become a strong series, but as it is, I feel like it has an identity crisis that it hasn't yet put to the test. For example, it is both a mythic story and one that is quasi-historical. In that sense, not unlike how Berserk is fantasy and grounded in real-world technologies, civilizations, etc. But in Berserk, it is immediately clear where those two paths meet, literally in the first scene. That hasn't presented itself in Duranki yet. In any case, it certainly doesn't feel like a short series, but one that is putting down roots for the long haul.
You must log in or register to reply here.
Share:
Facebook Twitter Reddit Pinterest Tumblr WhatsApp Email Share Link
Top Bottom