In my opinion they should sell the base as optional. Just saying...

and i dont understand why the red cape cost additional 10000yen.

Just wondering if anyone is getting this figure?

Totally agree with your opinions why 100 000yen? The extras are so expansive...it's time to do new statues I know that's difficult for them they made a lot but stop with "special version"

I get bored of AOW and theirs limited (unlimited) products.

I ll turn my self to other stuff like this : off topic, but that Tsume Shiryu is ridiculous. I know preorders in China sold out almost instantaneously, patiently waiting for Tsume to list for the rest of the world.
H

sensui said:
off topic, but that Tsume Shiryu is ridiculous. I know preorders in China sold out almost instantaneously, patiently waiting for Tsume to list for the rest of the world.
Click to expand...

there is a proof that you can produce 500 600 units and sell them all with a decesnt price point, they are doing great things
S

Its out for preorder now
http://www.tsume-art.com/en/product/dragon-shiryu-hqs

I agree Tsume done great things. Very good scult. And take risks in these achievements. But level painting Art-of-war are far ahead of them. In Tsume there is still a big difference between what you command and what you get at this level (burrs and scratches are still too many. And do not even talk about breakages).
This is not the case at Art-of-war. What you see on the website is what you get home. Breakages are rare and the paintjob is perfect. The packaging of these companies have nothing to do with each other. They are significantly higher at Art-of-war. It's all of which are also involved in price differences between Tsume and Art-of-war. Not just the number of units produced.
Besides Cyril Marchiol CEO and founder of Tsume to post on Facebook today if it produced only 300 units of Shyriu it would cost 1000 euro. They will do 1200 for 449 euro each.
If Tsume made HQS (High Quality Statue), Art-of-war made EHQS (Extra High Quality Statue)
Warning I appreciate what Tsume and I have several of their statue, but for me Art-of-war is still far ahead in terms of quality.
Quality at a price. And unfortunately it is still more and more.

I will agree that Art of War's painting and overall quality excels over anything else I've owned (and I've been around the block on almost all the major manufacturers/companies by now). The paint job has no equal, the material they use on their resin is noticeably better than most (Tsume for sure, and I own almost all Tsume HQS's), and the packaging also is lightyears ahead of any company I've dealt with....quoting my good buddy here, the packaging on the 20th anniversary type statues look like you can drop the box out of an airplane and it'd survive. Not to mention the level of detail AOW puts into the packagin itself on the exclusive pieces, felt foam enclosures, wooden chests (like for original Battle of Doldrey).....this all cost major $$ at the quantities they are running and I think a lot of people forget this. I always get a special feeling that you don't get elsewhere opening a new AOW statue.
Here is the problem though....business ideals/company direction needs some new direction. I know they tried to diversify with Samurai Animals, Fuji Mtn, and other misc goods.....hoping they'd like off like a fashion statement....but so far the gamble has not paid off. Berserk is really their meat and potatoes and it's only ONE IP trademark afterall......even with these limitations, they aren't helping themselves with the typical repaints/re-releases. This is where companies like Tsume has it right IMO, spend the time to acquire multiple high profile IPs at their disposal and offer high quality sculpts fans appreciate and flock to......another Guts, Griffifth etc isn't going to turn heads unless it's spectacular.....there's already been too many.
S

Will it be weird to add extra blood effects?
S 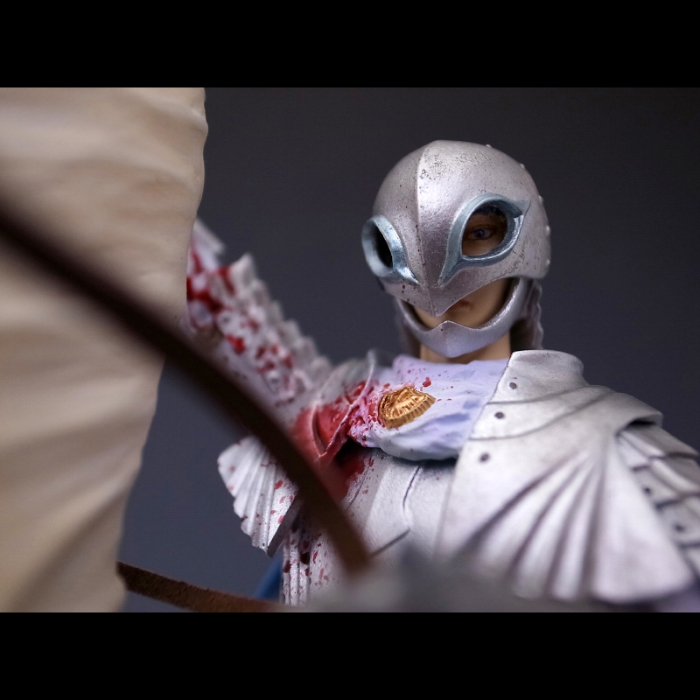 Hurry before it's restocked!

Aazealh said:
Hurry before it's restocked!

The bloody painting on this statue has no sense...

AOW and how to make money...
S

The bloody painting on this statue has no sense...

AOW and how to make money...
Click to expand...

It looks so artificial, the blood. I don't know, I feel pity for AOW, they could have improved , and they gave us amazing sculpts, but nowadays they're trounced by everything else. Even figma have better sculpt and paintjobs.
You must log in or register to reply here.
Share:
Facebook Twitter Reddit Pinterest Tumblr WhatsApp Email Share Link
Top Bottom