Scientists say they have evidence that a ferocious dinosaur made famous by the movie Jurassic Park definitely had feathers. Experts say the dinosaur, called Velociraptor, had a wing structure just like modern birds. VOA's Jessica Berman reports.

A new study by American researcher Alan Turner and his colleagues provides the first conclusive evidence that Velociraptor, a sprinting, vicious dinosaur that lived some 80 million years ago, had feathers.

The Velociraptor in the current study is estimated to have been one meter tall, 1.5 meters long and weighed just over 13 kilograms.

Turner, a graduate student at the American Museum of Natural History in New York and lead author of the study, says Velociraptor appears to have been a smaller creature than in Jurassic Park, but just as nasty.

"It's sort of as if you scaled up a chicken and then gave it really nasty teeth and big claws on its feet," he said.
Click to expand... 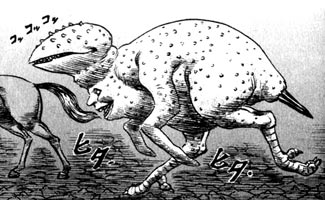 "Clever girl." XD​
At least Dr. Grant was right though, they were really related to birds.
D

Berserk is Divine and Human

Anyway some years ago, I'd already heard some theory in which the raptors may have been feathered, expecially on the spine and tail.

Interesting when you think about it, how much we've modified (shed more light on) dinosaurs over the years. They were depicted way back when dragging their tails on the ground etc. I remember being like 5 and watchin specials on dinos and SO much has changed. Very cool tho.

How cool was JP the first time you saw it. Damn I hate how time flies.

Proj2501 said:
Interesting when you think about it, how much we've modified (shed more light on) dinosaurs over the years. They were depicted way back when dragging their tails on the ground etc. I remember being like 5 and watchin specials on dinos and SO much has changed. Very cool tho.
Click to expand...

Yup, shows how much we have left to learn about everything else too.
S

I choose to disbelieve it, as it's not as cool.
M

This is clearly bullshit. Neither Jurassic park nor the bible said anything about feathers on raptors. I know because I went to the creationist museum and the raptors in there didn't have feathers either, but they did have saddles and rear-view mirrors.
C

That picture (photo) of Jesus wrestling raptors will have to be updated.

But the link between dinos and birds grows ever stronger. First with bone structure now this.

I wonder how Steven Spielberg is gonna handle this for JP4.

While we're at it:


SABER-TOOTHED TIGERS BITE!... or not, in this case.

The sabretooth tiger may have looked a fearsome sight with its massive canines but its reputation takes something of a knock with a new piece of research.

Scientists who have studied the extinct creature's skull in detail say it had a relatively weak bite - compared with, say, a modern lion.
Click to expand...

Not really a new theory, but still, I think the dream trampling should continue

Staff member
Hehe, it's funny you mention it because my delusions of coolness about sabertooth tigers were shattered really early in my life, when I read an article about how their oversized teeth were more bothering than anything and most likely responsible for their extinction. But it looks so cool!

Marvel called it when they gave Sabertooth his "bear-like" strength instead of huge fuck off teeth. Still, 1,000 Newtons of pressure is till enough for me to not go sticking my arm into it's bloody mouth!
O

The chicken thing is really disappointing. I always wanted to ride a Velociraptor, but now...I WANNA EAT ONE!

Ha ha, seriously, this is an incredible link between birds and dinasours, and this might be one of many famous giant's of the past that will completely change in our eyes. Has anyone heard about the Wooly Mammoth cloning project? I expect that we will have huge breakthroughs in biology and other studies if we examine the behavior of an animal that shouldn't be able to survive today on its own.

Staff member
It'd be awesome if they could revive a mammoth, but their idea to impregnetate an elephant with mammoth sperm seems a bit dubious to me.
D

It'd be awesome if they could revive a mammoth, but their idea to impregnetate an elephant with mammoth sperm seems a bit dubious to me.
Click to expand...

Exactly. It'll just end up being a cross between a mammoth and an elephant, not a true mammoth.
S

Better than zero halves of a mammoth, I think...
D

Better than zero halves of a mammoth, I think...
Click to expand...

Not really because even though it's half mammoth it's still not a true mammoth and there still won't be any accurate data to be gained from studying them.

Though they'll get loads of info from the new breed they create.
S

I think you're looking at it from the wrong angle.

smoke said:
I think you're looking at it from the wrong angle.

The real question is are they going to use frog DNA?
O

Aazealh said:
The real question is are they going to use frog DNA?
Click to expand...

And will they be able to survive on their own? Nature always finds a way...

Ah, if only my childhood dreams of dinasours came true!

Staff member
Cool idea, but I've got a better one. What if they cloned all these dinosaurs using mammoth sperm, and made a theme park out of it? Like, kind of a zoo/theme park, where you could ride around in a jeep and view the dinosaurs in a safe, caged environment with electronics all linked up to a central mainframe computer?

This thread is one long Jurassic Park joke