Johnstantine said:
The only reason I put the prequels above the new Disney stuff is due to the Clone Wars animated series. As I've said countless times on the boards, that series takes the veil of shit off of the prequels and makes them enjoyable.
Click to expand...

Interesting you actually put the new trilogy below the prequels, and while I can understand how that series could retroactively put the prequels in a better context, it can't make those stinkers into well directed or acted movies; they're really bad movies beyond the story problems! Just like whatever problems I have with the new Star Wars movies' plots, I can't complain about the production values. It's actually not fair that the prequels in essence give Disney a rock bottom they can never reach, so the worst Star Wars movie they make will probably only ever be the 4th worst Star Wars movie. Unless they decide to do Binks: A Star Wars Story. Anyway, saying Last Jedi is like the 4th, 5th or 6th best Star Wars movie becomes contextually meaningless if one considers below that a bottomless void, so I probably shouldn't even rate those because they just throw off the curve. Another interesting thing is how well the new movies do with critics, all of them being ranked above Return of the Jedi on RT: TESB 94%, SW 93%, TFA 93%, TLJ 91%, R1 85% (I'm sure the Disney machine being behind them doesn't hurt these scores), RotJ 80%, RotS 79%(!?), AotC 66%, TPM 55% (of course the audience score currently puts TLJ below Phantom Menace and only above The Clone Wars movie =).

Also, this shit's getting juicy:

Maybe all the cracks we're seeing from production to production are about to break wide open.


Aazealh said:
I mean despite the hatchet job they did on Luke's character, his final moments aren't so bad. His confrontation with the First Order is pretty damn badass and he makes a fool out of Kylo Ren in a way that I feel is true to who he should be (a benevolent Jedi master who does not want to fight his nephew to the death). And while his death itself is pretty ridiculous and lacking in dramatic weight (reminiscent of Padme's...), the setting suns make for some cool imagery.
Click to expand...

Agreed about Kirk, and your analysis of Luke here improves my disposition about the whole thing. =)

Walter said:
What mattered to me was that Luke felt like Old Luke. Even if it didn't truly amount to much, it's what I wanted from him -- to feel what the years had done to him conveyed through his acting, not a montage, or simply being told about his bitterness. And his motivation to remove himself from the stage made sense to me. The unspoken message of his hermitage was that systemic abuse of the force needed to be wiped from the chess board (He really should have taken care of the Kylo problem before he retired though, just saying, that's a bit messy for a "Jedi Master.")
Click to expand...

I'm going to come over to this side of things eventually because, again, this is all we're going to get, but I also can't help but think it's a failure overall of the Star Wars fans now making these movies to handle Luke like a regular character, properly extract him from storytelling purgatory, reintegrate him into the plot, and eventually do something interesting or even relatively normal with him. There was a number of pretty straightforward ways to do this and for whatever reason they treated Luke like a radioactive faberge unicorn before disposing of him as soon as possible (while having it both ways, as you put it about the Jedi, along the way). It's hard for me to accept not getting him off that island they plopped him on as a great reintroduction, development and sendoff for the character, let alone the best they could do.

Walter said:
Presumably because they still need to market lightsabers to kids (It's been a few years, but my rant about Disney's franchise syndrome compromising storytelling remains the same).
Click to expand...

Walter said:
The film casting the military-industrial complex like a skin over the endless conflict felt like an interesting touch at first. I'll always listen when someone attempts to do a real-world deconstruction of cartoon-like wars. But this one rang hollow, because it's fucking Disney, people. This is a missive from the Entertainment Empire, lecturing us about the folly of choosing sides when the middle man gets fat on the blood of the sheep caught in the perpetual war. I didn't check, but it wouldn't be crazy if Bob Iger had a cameo at the casino scene.
Click to expand...

I was debating the movie with friends last night and one of them, my buddy from the GoT thread actually, had the the most sinister interpretation of this vis-a-vis the seemingly puerile ending: that the little boy is literally playing with Star Wars toys and YOU TOO can be the hero if you BUY BUY BUY! He acknowledged this of course wasn't intentional but it's kind of impossible not to see once you look at it that way.

I don't feel as harshly towards Disney's "evil empire" though because the creative people they've employed are still doing a better job with pop entertainment than just about anybody (and the missives in this film are theorhetically from Rian Johnsons for better or worse). Plus, here we are participating in it despite all our complaints. Anyway, the Star Wars prequels (and even the originals as far as merchandising is concerned) and pre-Marvel Studios superhero movies were not great examples of storytelling integrity before Disney got a hold of them either, tired as the current formula may be (and Star Wars doesn't quite have a working one, theyre stil experimenting, which is more interesting to watch than the plots of the movies themselves, unfortunately).

Walter said:
I'm not really interested in ranking the movie against the others, but I thought this was a fine entry. I enjoyed it more than Force Wakens, mostly because the remix nature of that movie still rubs me the wrong way. This was at the very least a new experience.
Click to expand...

So you have it ranked fourth!? =) And it is and it isn't new, like TFA, since even when seemingly spurning nostalgia, by flipping the most obvious twists, it's still heavily reliant on it and the best it could do was sort of pave the way for something new... From JJ Abrams of all people!

I thought this movie also fell back on old Star Wars lines more than TFA, "Rebel scum?", R2-D2 playing his #1 hit (these movies are still like a greatest hits album), and a strong case can be made it's essentially remixing Empire as much as TFA did ANH: the escape from the Reb-sistance Base at the beginning, leading to a movielong chase, seeking help from a more luxurious civialian port, being betrayed by a scoundrel there (that was literally almost Lando), while the young Jedi struggles with a difficult an eccentric master before leaving to save their friends, leading to a play on the throne scenes from Jedi (like the shield generator callback in TFA), familial revelations, literal offers to bring order the galaxy... and they just moved the AT-AT Hoth battle, "Mm, salt" to the end. So, if you hated the callbacks in TFA and think it's essentially just an updated ANH, TLJ is just as culpable and for all it's allusions to change is still more of the same in the end. We got the young Jedi, the Dark Lord, an Evil Empire, a Rebellian, and some scoudrels, but unlike the originals it feels like the galaxy is only as big as what we see on screen and there's only like those dozen characters left in it. The Star Wars universe is literally down to that, and relying on Abrams to reinvent it again. Anyway, what sets the film apart and could ultimately redeem it for me is the reflection on Star Wars itself, but it still doesn't offer anything really new or worthwhile by the end, just a push for it (and, correct me if I'm wrong, you didn't even really like where it took/left them).

These movies occupy a weird space; there's never been so much talking up or down of movies most people can agree are just "fine." =)

Maybe all the cracks we're seeing from production to production are about to break wide open.
Click to expand...

Oof, that's a harsh article. I lost interest in it the moment Ron Howard signed on. It has Justice League written all over it.

Johnstantine said:
Oof, that's a harsh article. I lost interest in it the moment Ron Howard signed on. It has Justice League written all over it.
Click to expand...

Yep, as TLJ shows us it's hard enough for one person to lead a complicated production like this and create something that feels cohesive and whole, and it was automatically going to be uneven once they replaced Lord & Miller with Ron Howard (who make Zack Snyder and Joss Whedon seem like the same director), but this is a mess. The only hope is that Howard is redoing so much that he's basically reshooting the entire movie his way, but then we don't know if that'll make it any good either (it is written by Lawerence Kasdan, but Alden Ehrenreich can't sell himself as Han Solo it doesn't matter). This allegedly fake artwork isn't bad though: 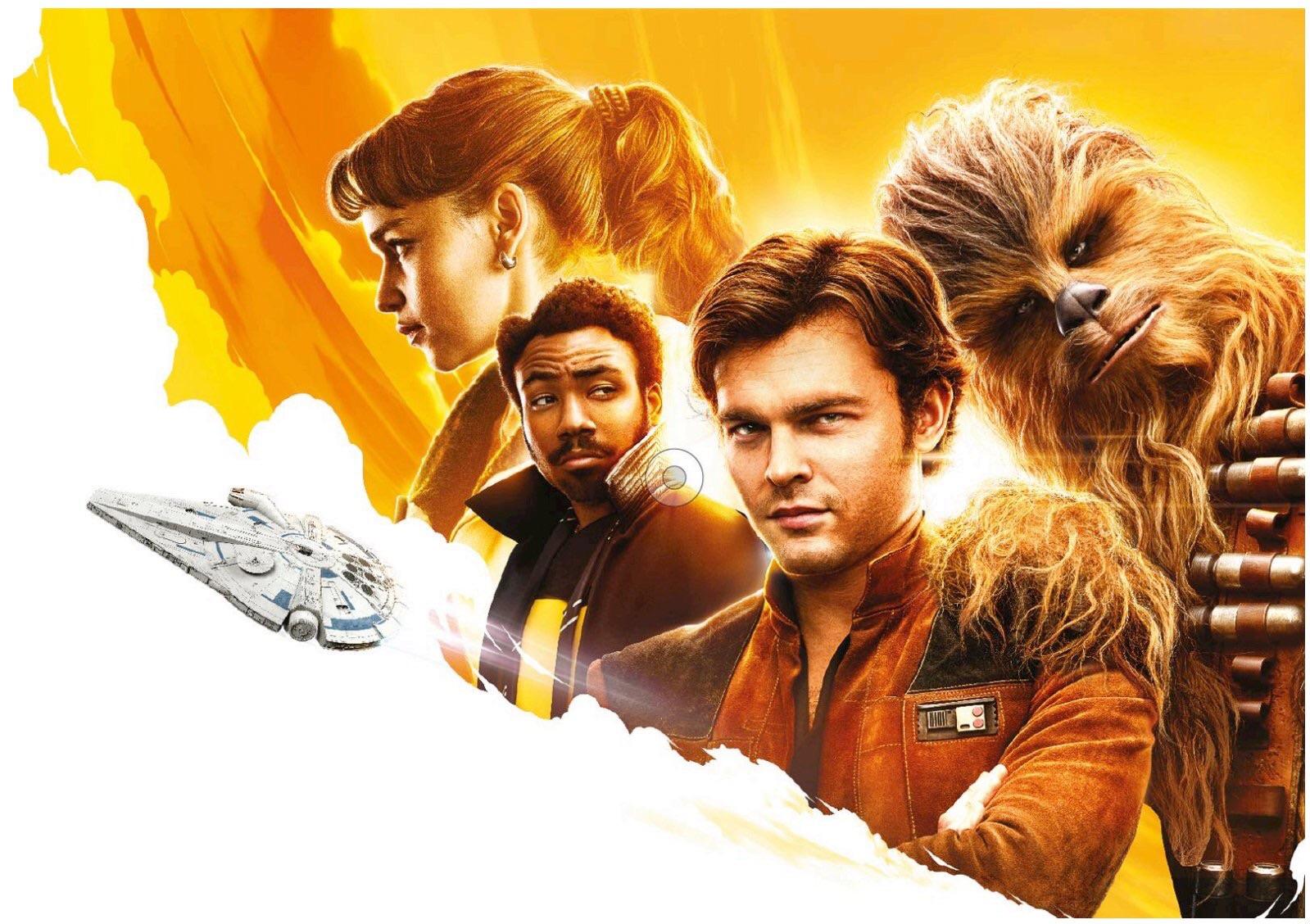 I'm betting the real one will actually be worse.

BTW, Kojima is back with another, mostly, interesting film review (also check out that poster
with Dark Luke!?
):

It's not as good as his Blade Runner article, but it's kind of hard to say something new about Star Wars at this point. Anyway, I'm enjoying his second career. If SK.net sends another letter to Miura we should ask if he'd be willing to moonlight as our official film critic. =)
You must log in or register to reply here.
Share:
Facebook Twitter Reddit Pinterest Tumblr WhatsApp Email Link
Top Bottom