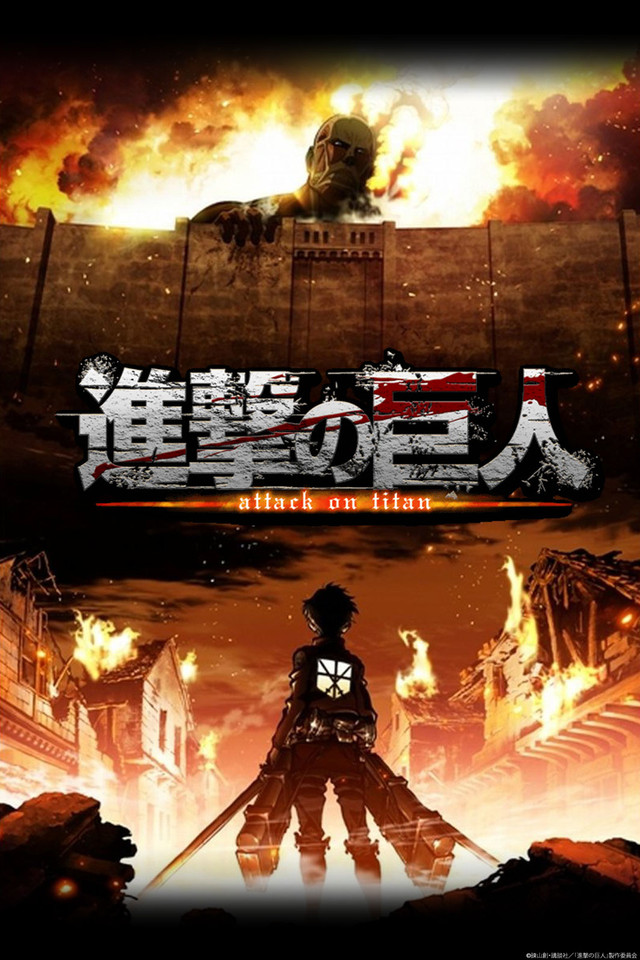 Wondering if anyone else here has been watching this show. The manga started in Japan a few years ago, but the anime adaptation just began last month, and it's quickly grabbing everyone's attention.

I don't watch anime often these days, but this is one of two recent series that have actually gotten me excited (The other one being Puella Magi Madoka Magica.) It takes place in a world where humanity has walled itself off into an enormous colony in order to protect itself from gigantic creatures called Titans. For thousands of years they've been safe, but of course we are introduced to the story just as something goes wrong, and the enormously unprepared populace is reminded of what their ancestors were hiding from.

The Titans themselves are very reminiscent of the off-putting, not-quite-human appearance of apostles in Berserk; specifically the crowd that gathers before the Eclipse. There is also another great scene that had me grinning in one of the later episodes, reminding me of a certain blond-haired character. I'll leave it at that.

This series was really overhyped by a lot of my friends, so I was skeptical going in until I was finished with the 2nd episode. But really the "pilot" should be considered an hour long episode that was divided into two parts. I was hooked by the time the credits rolled, and I'm really interested to see where this story is going. On a final note, I haven't enjoyed an ending theme to an anime in a long time until this one came along. So catchy!

Anyone else here watching it, or a fan of the manga? Episode 7 should be airing in Japan later today.
T

Been watching it as it sues in crunchyroll. I thought the titans reminded me more of the monsters in Gantz.
S

It's quite good but very overrated. People started calling it a "classic" and "one of the best anime ever made" since the first episode.

SuperVegetto said:
It's quite good but very overrated. People started calling it a "classic" and "one of the best anime ever made" since the first episode.
Click to expand...

Yeah, like I said above, people were going crazy way too early, and there's no way it could have lived up to that hype. But most anime fans haven't read Berserk, and even among those who have, there is a sizable number of people who don't quite "get" it.

I'm caught up on the manga and anime. I think the anime is a lot better. The manga has a very rough art style that just doesn't appeal to me, it being the author's first published work makes that understandable though. I'd say that the world, the titans, and the mystery surrounding them is the best part of the series while everything else is mediocre at best. I really really dislike Eren. The author tries too hard to make him justified and ALWAYS RIGHT and it annoys me. That flashback to him as a kid was the edgiest thing I've seen in a long time. It's like if they tried to make a 9 year with the RAGE of Guts but with no reason for it. The author's writing style is really shitty too, he likes to throw in flashbacks right before major events where what happened in that flashback is important, which gets old really fast. The anime is moving events around though, which is good.

In any case, this is the best thing to have come out of the franchise along with all the other parodies of the OP:
http://www.youtube.com/watch?v=PDHCLjuOzXY

I agree that the ending is pretty cool too.

I've been buying manga since I read about it in 1001 Comic books: You should read before you die. And it's pretty interesting ,as Dar Klink mentioned art is a bit rough but mostly at 1st volume ,after that it improves. It's pretty interesting and something fresh. I really like such dark stories and this one in particular is good. Of course Eren,well he's not the most likeable character but his attitude changes after several incidents. I kinda started following news about anime when it was announced and IG is doing amazing job with it ,this is one of rare ones with amazing soundtrack which I took liberty of pre-ordering with Descent. Though it will be running for now around 24-25 ep so they will actually stop around where the really fun part starts.

Agree with everything Klink said above. I was curious about it and began reading it when I saw the Japanese cover for volume 1 at KinoK and the over-explaining ruins it. The beginning was alright, the initial revelations are 'cool' but lose effect.
S

I just finished reading the manga as well... gotta say its a fresh alternative to the long hiatus that Berserk is currently in.


Maybe SNK might have attracted more fans here if it does have this special element in it: I find "humans vs monsters" scenarios to be quite vexing in their predictability: no matter what happens, the humans are going to win in the end, and it'll be another great excuse for us to wave around, claiming that we're the best damn thing to come out since God created Angels. Compounded on top of that is the fact that these "monsters" aren't exactly what I'd call original. They're just titans lacking skin and while that is something I'd find to be legitimately frightening to go up against, I certainly wouldn't view it as something foreign or "alien".
S

Anyway anyone actually read up on the spin-off SNK series, before the fall?


I find that the protagonist kyukuro have a very similar background as Guts background. Born from a dead mother womb and ppl feared him.

Staff member
If you're interested in a story about fighting giants that has ties to Berserk you'd be better off reading Gigantomakhia.
V

So today, I half-watching Attack On Titan while writing short responses. I'm glad that I'm watching it this way because I would have turned it off sooner. I can't believe this show is getting comparisons to Berserk. For what? Its main character raging-out, I guess. The amount of bullshit in this show is reaching, and possibly exceeding, new found levels of awful.

Some observations:
1) The constant shouting, raging-out, or generally over reacting in scenes that do not require it. I watched a trial scene and half of the time was spent between unnamed characters yelling.

2) For such a "serious" show there are far too many stupid moments involving dumb facial expressions or stupid actions between characters.

3) I enjoy the uncanniness that the Titans have, such as the exaggerated proportions and need to consume to excess.


Aazealh said:
If you're interested in a story about fighting giants that has ties to Berserk you'd be better off reading Gigantomakhia.
Click to expand...

The art style for this manga is very unappealing to me as Klink kind of said earlier and as for Eren...yeah I didn't really like him much either. To be perfectly honest I didn't really end up liking any one character in this story. I've just seen the anime so I can only speak about that but I found the animation to be very attractive especially during action sequences. The music was another thing that was a positive feature here, aside from those things and the mysteries surrounding the Titans themselves that's about all that kept me watching. I completely agree with this anime being overrated though, there was waaay too much praise even before it really got grounded.

I just caught a random episode of this show on Cartoon Network last night before I went to bed. Since I don't keep up with anime at all these days I was completely in the dark about this show. I must say I was impressed. I had no idea what was going on but the episode I saw kept me interested. It was a very action oriented episode and the Titans were pretty cool. I also like the animation.

Oburi said:
I just caught a random episode of this show on Cartoon Network last night before I went to bed. Since I don't keep up with anime at all these days I was completely in the dark about this show. I must say I was impressed. I had no idea what was going on but the episode I saw kept me interested. It was a very action oriented episode and the Titans were pretty cool. I also like the animation.

if you have netflix all the episodes are there.

Man, I must have been the only person unmoved by this. I couldn't make it past the first three episodes.

Interesting thing about the writer of Attack On Titan, Isayama: He is a huge Berserk fan. He once shared a photo of his office on his blog, and we can see more than 10 volumes of Berserk on his bookshelf. Maybe he has more in his home.