Could Silat Be the Next Potential Owner of the Behelit?

Before I begin, I think I should briefly state who Silat is just in case no one knows who he is.

Silat is the prince of the Bakiraka, a clan of Kushan assassins that are seen throughtout the story.

He wants to bring his clan back to their former glory and as leader, he his goal is the well-being of his clan members.

He has four large body guards called the Tapasa who accompany him almost everywhere on his missions as well as a legion of skilled assassin warriors.

Now, to explain why I think he would make a possible candidate to own Guts' behelit is that he so far is the only character with a goal outside of fighting against the inhumans.

I mean, it's only a matter of time before Rickert and Guts reunite again and Silat puts two and two together and they become allies, somewhat like how Farnese and Serpico ended up being.

I also think it would go without showing that if his goal to reinvigorate his clan were to fail somehow or he would be made unable to fight or move, his will could possibly crumble.

A lot of people tend to say that Farnese or Serpico could possibly be the ones to activate the Behelit, but Farnese is a wierd case because I doubt she would have anything besides Serpico and her new friends to look after.

This goes double for Serpico, because Farnese is the only and main concern for him at this point. I couldn't think of anything causing him to lose himself in sorrow unless Farnese died.

And since I don't know much about Roderick's backstory or Azan's (not to mention Isidro is a comic relief so definitely a no go) I thought "hey what if the behelit ended up going outside Guts' inner circle?"

Of course, even if Silat were to envoke the Behelit and summon the Godhand, I doubt he would be able to go through with the sacrifice: 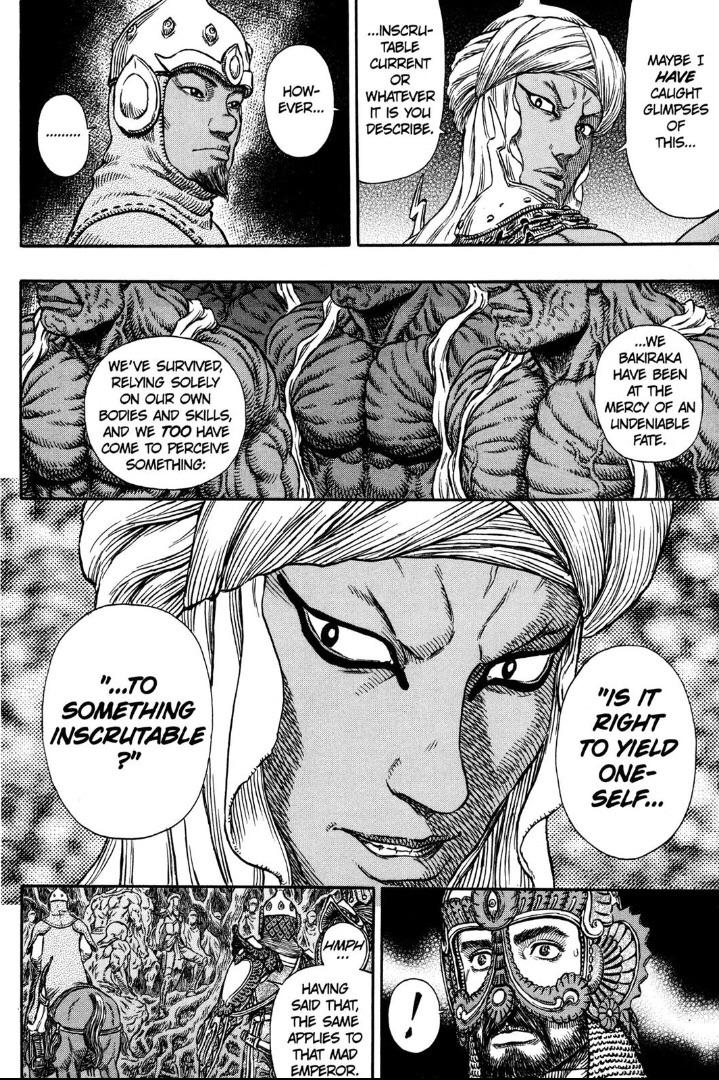 This right here is by far my favorite panel of Silat ever and there is nothing else to topple it. You see, I've always wondered what would happen if somone had refused a sacrifice before they had been turned into a demon?

I think Silat would be a perfect way to showcase what would happen along with the fact that not everything will go the Godhand's way since Silat has a few credentials in order to be someone who would possibly sacrifice:

But what do you think?

Staff member
You've answered your own question about whether Silat would or not. His scene in Volume 33 with Jarif seals the deal. Silat doesn't trust the idea of putting humanity in the hands of something that is beyond human. It would also be antithetical to what seems to be the Bakiraka way -- embracing martial arts that push the limits of the human body.

As for what would happen if someone refuses a sacrifice, we already know even if we haven't been explicitly shown it. The ceremony would halt, and they'd go on living, but within "the ruins of their dream." That's explained by Void in Volume 12 to Griffith. The way the count's ceremony ended in volume 3 is pretty much that, only he died by the circumstances with his fight with Guts beforehand.


The Hawk Of Light said:
(not to mention Isidro is a comic relief so definitely a no go)
Click to expand...

You'd have been better off not mentioning such a thing at all. Isidro cracks a lot of jokes. He's a kid, afterall. But relegating him to just comic relief isn't consistent with how he's been portrayed in the series. He has an ambition, and he's grown as a character quite a bit since he first appeared. If you don't see that, maybe go re-read some of his highlights from Vol 18 to 22, then 24-26, then 35-37. Now... will Isidro use the beherit? I doubt it. I don't think Miura's going to use that beherit in a traditional means, even though it's obviously there as an element of dramatic tension.
Last edited: August 26, 2020

Staff member
The assumption that the beherit Guts has been carrying must absolutely be used by someone to turn into an apostle is misguided to begin with.

Putting that aside, I don't see how becoming an apostle would move the needle on restoring the Bakiraka's place among the Kushan empire. I mean, we know one of their members became an apostle at some point (Rakshas) and he was exiled. Lastly, that goal he had ceased being relevant in Fantasia.
R

Obviously Guts is going to use the Behelit as ammunition in a dwarf-modified arm cannon to gank Femto. His gunpowder will probably be made from an anti-causal reagent and gnome dung for good measure.

Foss or a member of the Vandimion family besides Farnese could be a candidate, though it might be used as a key for the inhabitants of Skellig to attack the God Hand.

PsychoViper said:
Foss or a member of the Vandimion family besides Farnese could be a candidate, though it might be used as a key for the inhabitants of Skellig to attack the God Hand.
Click to expand...

Why Foss...? And what would the significance of a Fosspostle be?

Walter said:
Why Foss...? And what would the significance of a Fosspostle be?
Click to expand...

He reminds me of Ubik...

PsychoViper said:
Foss or a member of the Vandimion family besides Farnese could be a candidate
Click to expand...


PsychoViper said:
though it might be used as a key for the inhabitants of Skellig to attack the God Hand.
Click to expand...

Guts has already been told it can't be used that way.

Guts has already been told it can't be used that way.
Click to expand...

What episode was that? It’s been a while since I’ve re-read the series.

PsychoViper said:
What episode was that? It’s been a while since I’ve re-read the series.
Click to expand...