Walter said:
Having it published in a volume form would definitely be the first step. But it's too soon to tell. Though Dark Horse has been pretty good about releasing his other works here in the USA (Japan and King of Wolves). So I'd say it's possible, probably even likely given that they'll have nothing else to publish for a while.

Update:
The Japanese news site Natalie.mu recently posted this image of the ad SANS text. Awesome! One step closer to the real thing...

Nobody can draw noses and chins so anatomically realistic like Miura. Nobody

Roderick, is that you?!

You couldn't really tell with the text slapped on top of the pic before, but damn those are some serious eyebrows.

Walter said:
Indeed, 202 pages is the size of a very small Berserk volume (smallest one ever was Vol 23 at 220 pages).
Click to expand...

You've forgotten a rather important fact here, which is that those official page counts aren't just for the content, they include all pages in a volume. Case in point:

So actually a page count of 202 pages is quite respectable, especially since Berserk tankôbon are relatively beefy compared to those of some other series. I fully expect it to be published as a volume in Japan. Anyway, that also means that subsequent episodes after the first one will average around 31 pages.


Grail said:
You couldn't really tell with the text slapped on top of the pic before, but damn those are some serious eyebrows.
Click to expand...

Thanks for those translations guys.


Grail said:
Roderick, is that you?!
Click to expand...

IncantatioN said:
That's what I thought too *high five*
Click to expand...

I understand what they mean though. The round nose a little bit.


Grail said:
but damn those are some serious eyebrows.
Click to expand...

I don't find them as intense as those of Martino's if I recall well,he had some serious eyebrows.

jackson_hurley said:
I understand what they mean though. The round nose a little bit.
Click to expand...

Round nose & round eyes, but Roderick's features are a lot finer.

Aazealh said:
Round nose & round eyes, but Roderick's features are a lot finer.
Click to expand...

There's hardly any doubt in my mind that Darkhorse will eventually release this. As others said they released both Japan and King of Wolves and they release a lot of less popular works by other artist with bigger selling series they have license too. Some other examples would be the author of Triguns other series Blood Blockade Battle Front and Hellsings author's Drifter. Hell, they even released two books of short stories from the creator of Eden, a series which actually sold very poorly.

So it might be a while, but we'll get it, considering Berserks popularity.
S

It's great to hear Miura was up to something. I was beginning to get a bit worried towards the end of the hiatus, despite trying not to...

Oooooh seriously how can one make an image with so little in it look so epic!?!?! Deserves to be on this page too and I´d have quoted it if Johnny hadnt done it first

A completely new original work from Miura... this is even more exciting news than a new episode of Berserk!
I instantly subscribed for YA when I read this.

Staff member
Shouldn't be long now before we hear something leak about the first episode. I'm guessing Sunday or Monday we'll get a little something, maybe a little later. My issue should arrive on Thursday or so.

I forgot to mention it, but the previous YA did include two additional advertisements for the miniseries, but neither disclose any new art or information. Same picture, same info we already have (which isn't much).

With Berserk, I've been conditioned to be content to wait, but I'm chomping at the bit here for information on Gigantomakhia. Very excited

And I´d say with good reason! 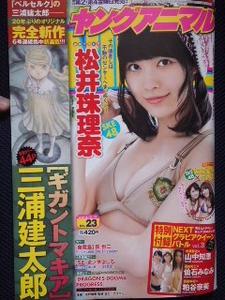 Staff member
Very interesting. Check out the background in that shot. Cannot wait.

Wow that looks really cool. I can't wait to see what Miura has in store for this.

The preview picture look great, really like the style of it. then again I didn't expect any different from Miura.

So the picture is from the new serie, right? Somehow I get a Berserk feel from it, not just because of the drawing style. But more from the background. The background reminds me somehow of the big whale monster Guts fights in the harbor of Vritanis.
R

Just saw the RAW when my friend showed it to me over Skype, the art looks gorgeous as usual and our protagonist seems to be a bit on the goofy side of things. A welcome change; I like Guts, but it's nice seeing Miura draw a not so serious main character once in a while.
B

Main character's name is Dellos Delos, unsure on the girl's.

PS: And yes, the next issue comes out with the next YA.

Staff member
So, ΓIΓANTO MAXIA it is. Quite a unique setting I have to say. Reminiscent of early Sci-Fi, where strange adventures took place on strange worlds. It'll be interesting to compare those demi-humans and other various monsters with creatures seen in Berserk.

So much dialogue! Im eager for a translation. Im trying to wrap my head around the setting. the first 3 and last 2 pages have me curious. and that SUPLEX!

Truder said:
So much dialogue! Im eager for a translation.
Click to expand...

Well, get to work!