Meeting on the Path of the Sword, or... 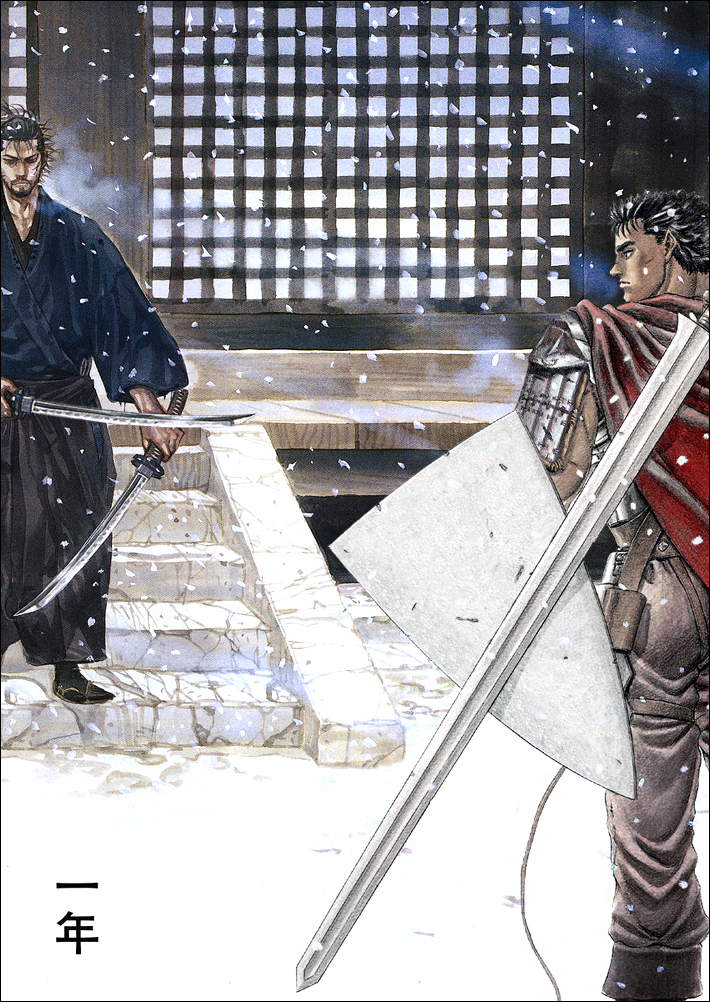 One Year​
To commemorate this most serendipitous occasion when new Berserk and Vagabond meet, a literal depiction of Guts and Musashi meeting during their respective yearlong musha shugyos (warrior's journey).

I wonder who won?

Wasn't there a hawk symbol on that shield? why remove it?
Still, great 'shop job.

As for the shield, since I committed to this taking place during Guts' year of training after leaving the Hawks, I wanted the shield to be just some random junker practice shield that Guts was experimenting with, it could be from anywhere, likely free from Godot's or something (BTW the sword IS from Godot's, which you can see in volume 11). Anyway, I originally thought he could have bought it at a bizarre or something for nostalgia, but I didn't think that was really in keeping with the nature of his journey, and also, the Hawks didn't even use shields. =)


P.S. I'd be remiss if I didn't thank Aaz, CnC, VHBob, Wally, and the other folks in the chatroom (you know who you are) for their suggestions and support. Thanks again guys!
H

I am requesting Griffith bring back his old Magnum PI/Berserk photoshops.


Vampire_Hunter_Bob said:
I am requesting Griffith bring back his old Magnum PI/Berserk photoshops.
Click to expand...

The Magnum page may be lost forever, I found the link, but it's to a dead geocities account of mine. Anyway, finally something new, sort of:

Not exactly an exciting or triumphant return entry for this thread, but I like it. I did this in about fives minutes over five months ago and for various reasons it never saw the light of day until now, but here it is, better than nothing. =)
C

well, 5 minutes over 5 months ago is a start

The collected Gutsfield from the Berserk Comical Comic Championships Round 1 & 2: 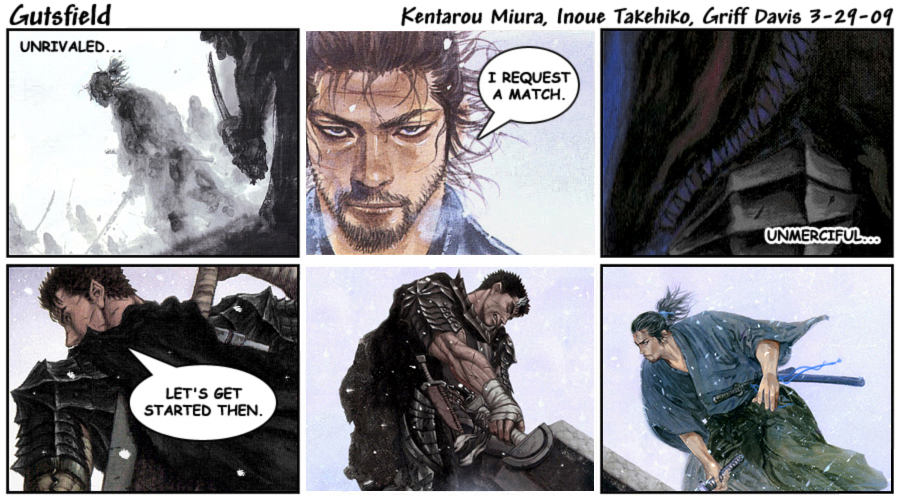 Had to share this: after a lot of work and a long journey for this instrument, I have now built and designed myself the coolest (looking) guitar ever; behold, "Cherry Axe!" 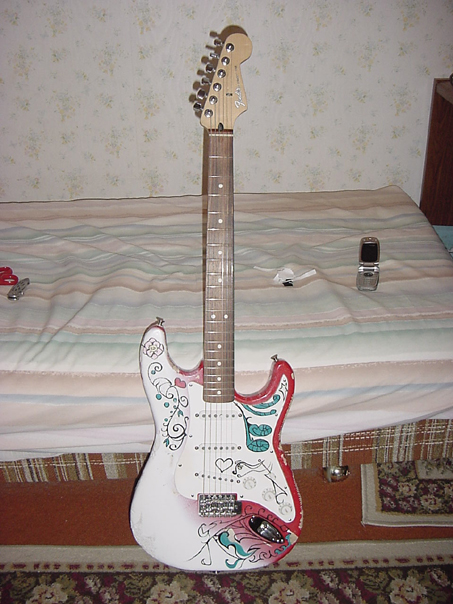 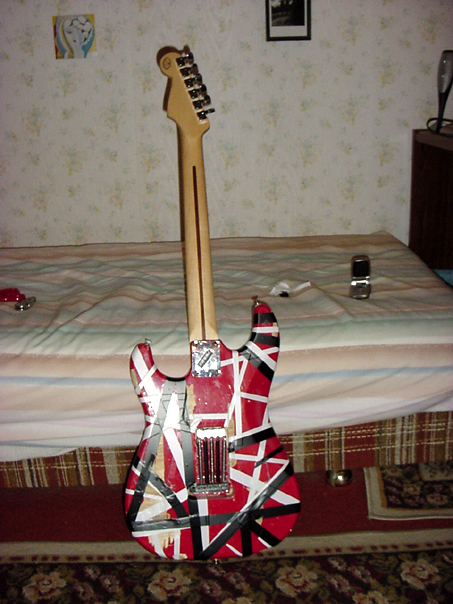 Combining the paint job of Jimi Hendrix's Monterrey Strat on the front with the the look of Eddie Van Halen's Frankenstrat on the back, I beg the question; will I now sound as good as both of them combined when playing this guitar!?

Yes. I think I will.

Kidding aside, this was my first guitar, I got it back in high school, and it already had a history with local people and bands before I bought it from a friend. Now, don't let that fool you, it was a total piece of shit made in God knows where. This thing was as cheap as they come, and went through many different iterations before arriving here (at one point it even had a maple neck and blue fringe on the body with an American flag pickguard =). Anyway, back in '04 I put all the original shit parts back on it, spray-painted the body half-white, and my then girlfriend (Onyx Magnolia here) was nice enough to paint it for me based on the Monterrey design. At that point, it was basically a showpiece and nothing else. Literally hung it on my wall.

When I finally decided to do what I'd been thinking about for years and fix her into a player! Arriving at that decision is a long story in itself, but needless to say, a nice guitar was scrapped for parts, but hey, it wasn't my best, or my first, so tough shit. Anyway, except for the neck plate and pickguard, I took everything off Cherry Axe; neck, hardware, electronics, knobs, buttons, everything; even the screws were replaced with all American Strat hardware, electronics, and pickups, and a nice special edition Fender Mexi neck. This thing was so shitty that after soldering the real electronics, I actually had to rout the cavity further so they would even fit and let the pickguard lay flush with the body. After that, I plug in and wait to hear the telltale signs of either total silence, or hum like a vacuum cleaner. Silence, could be very bad, or very good. So, I throw on the neck, a string, plug in, still silent, not good, pluck, and... VRRRRRRRRMMMMMMMM!!! She roars to life! Success.

Since then, it's just been a matter of playing and tuning/setting her up the way I want. As for today, I wasn't happy with the back, it was all fucked up from my beating up my shitty old guitar phase, and had some duct and electrical tape covering some of the damage, which looked okay, but still, kind ugly on what would otherwise be a nice guitar, despite all the other superficial damage. But, that electrical tape reminded me of something, and gave me an idea; with some white electrical tape as well, I could make it look like EVH's Frankenstein and the back of my guitar would look cooler the front of most. So, I did.

And that's how I made my first piece of shit guitar into a respectable player, and the coolest looking guitar ever. Or the most cliched one... whatever, it's my first and I love it. =)

Nice story there Giff. Damn I wish I had an electric guitar specifically a red one. I also really would love to have a piano even though I don't know how to use it properly.


宮本 グリフィス said:
Had to share this: after a lot of work and a long journey for this instrument, I have now built and designed myself the coolest (looking) guitar ever; behold, "Cherry Axe!"
Click to expand...


slan69 said:
Nice story there Giff. Damn I wish I had an electric guitar specifically a red one. I also really would love to have a piano even though I don'tknow how to use it properly.

Nothing like a red strat, especially fiesta red! Anyway, I grew up with a piano and I still don't know how to use it properly.

Haha, I'm sure it's already been done to perfection. I'll play "Tell Me Why" though.

Anyway, I've already made a couple of modifications to the back, moved/straightened a few lines, and now I'm thinking I might have used a tad too much black, so I might remove a few strips.


宮本 グリフィス said:
Nothing like a red strat, especially fiesta red! Anyway, I grew up with a piano and I still don't know how to use it properly.

By the way you should try playing Clash on the Big Bridge from Final Fantasy V. It plays when you fight Gilgamesh and I think it would be perfect to play on an electric guitar.


宮本 グリフィス said:
Haha, I'm sure it's already been done to perfection. I'll play "Tell Me Why" though.

By the way you should try playing Clash on the Big Bridge from Final Fantasy V. It plays when you fight Gilgamesh and I think it would be perfect to play on an electric guitar.
Click to expand...

Oh, it certainly is.

I'm going to go out drag racing until I hit a Rolls-Royce for authenticity. I don't think it'll matter though, it's the notes themselves in that song that are ugly.


宮本 グリフィス said:
Oh, it certainly is.
Click to expand...

I know it sounds great. Even the Decisive Battle from Final Fantasy VI sounds awesome on an electric guitar. That's what I would really love to have an electric guitar for, okay and just playing the shit out of it while my sisters get annoyed. 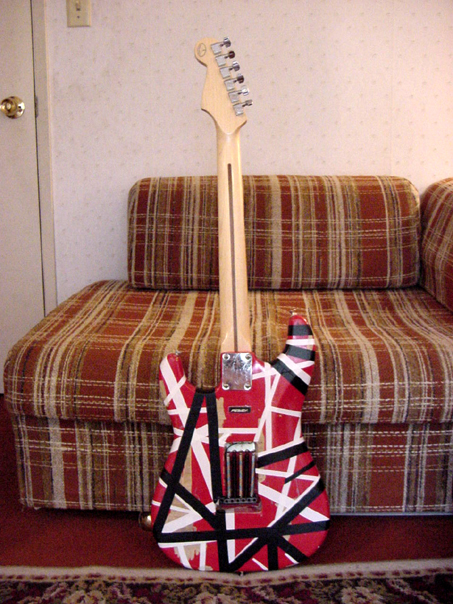 Update on the back: Cleaned it up a bit cosmetically, moved the little Peavy logo (from the strap I originally got with this guitar) and slightly adjusted the shortest black bar on the lower left so it intersects with the three long ones that go across the entire body. Looks a lot better overall now.

It's really sounding good too.
C

Dang, the April Fools thing was awesome! I saw it and at first thought you had extended on something Miura had already drawn as a joke. Awesome that you made it all yourself from editing artwork!

Some new stuff I threw together. First, a couple of pieces of SK.net promo art: 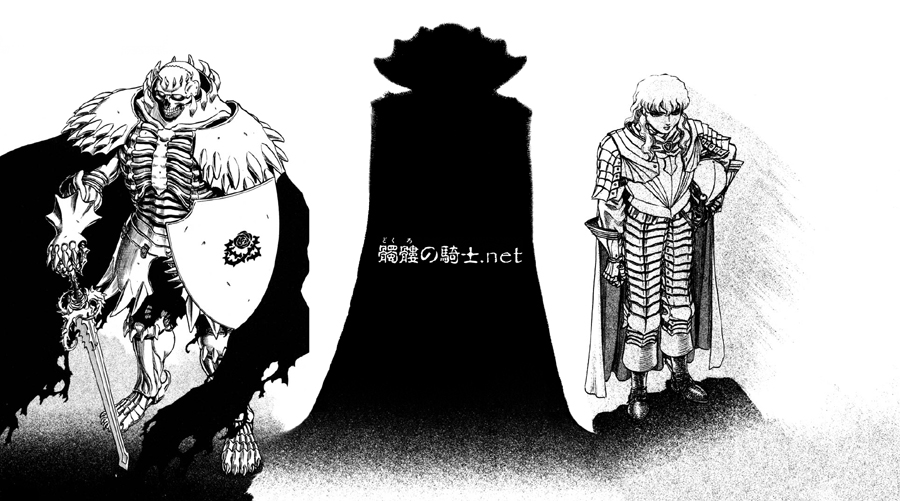 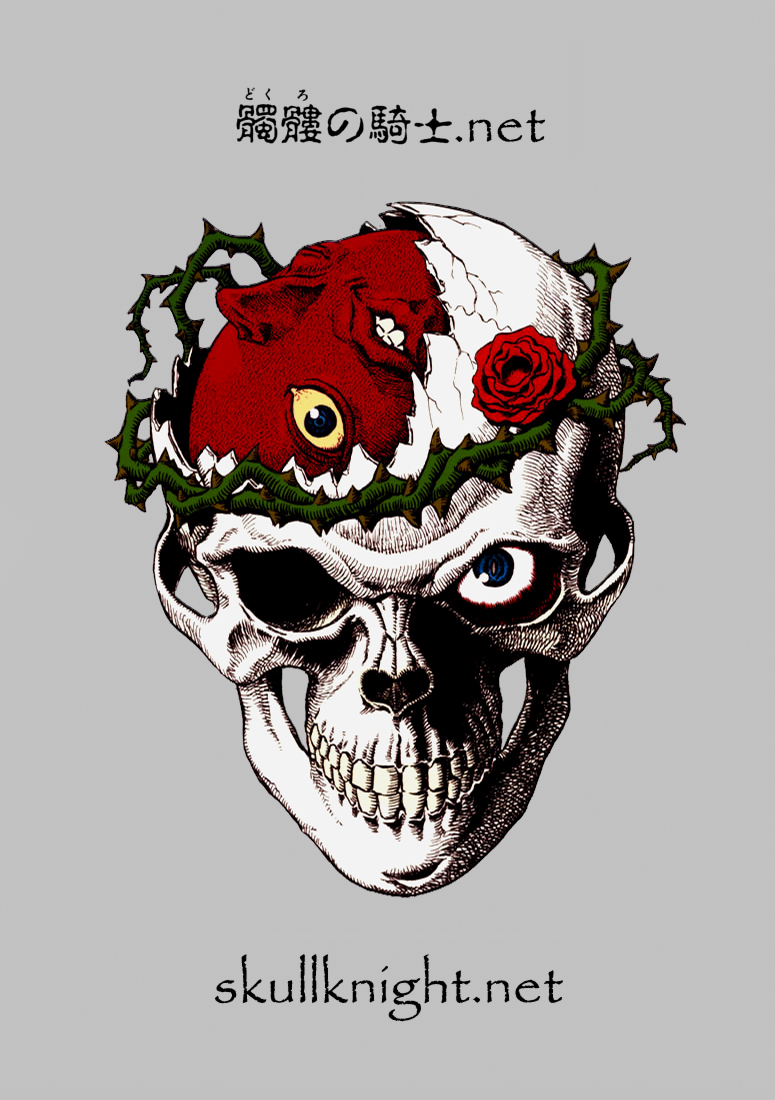 A composite of Falconia so one could look at all the details in one image: 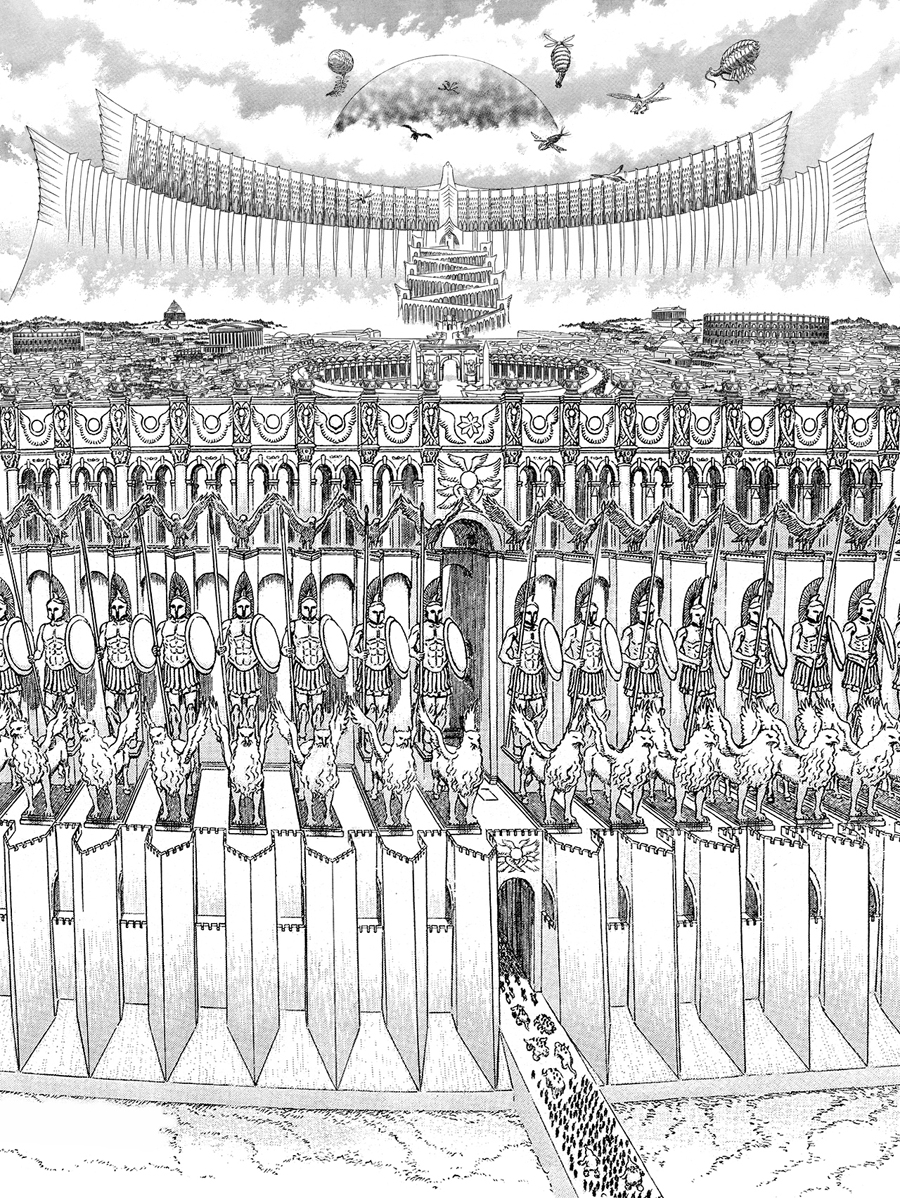 ​
And finally, my new avatar, an attempt at a stylized photo-realistic Griffith, akin to earlier Berserk movie poster attempts: 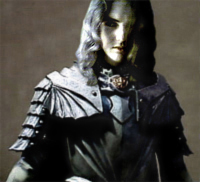 Great work on the Falconia image. There's a lot to look at in that shot, and removing the crease certainly helps take it all in.

I also think it's pretty cool how all the admins gravitated toward such BIG personas in the series. Works great for promotional art

Do you guys know where it's possible to get the font that the Berserk logo in English is written in?
BTW great images, I've saved a lot of them.


CCS said:
Do you guys know where it's possible to get the font that the Berserk logo in English is written in?
BTW great images, I've saved a lot of them.
Click to expand...

It's probably a custom-designed logo, as in drawn out and not typed.

EDIT: Thanks for the giant pic of Falconia, Griffith! I kept staring at it and realized exactly how Berserk will end:

You reminded me of two other quick composites I threw together for fun a while back, depicting TEH FINAL BATTAL: 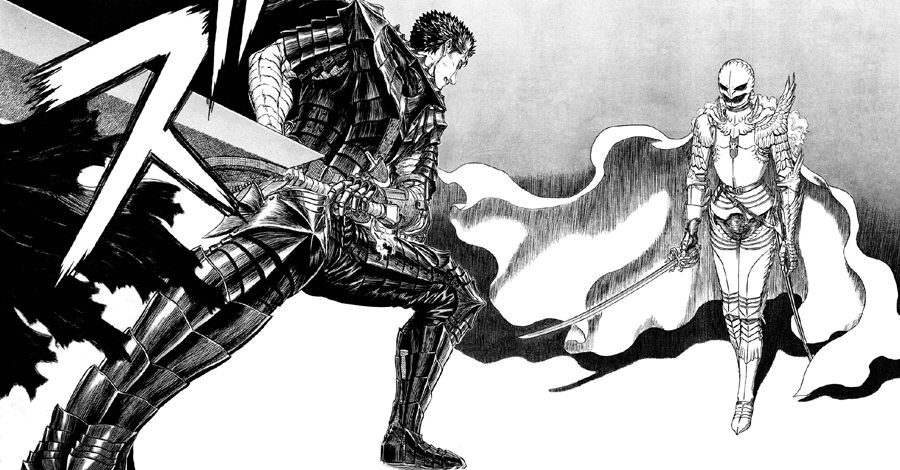 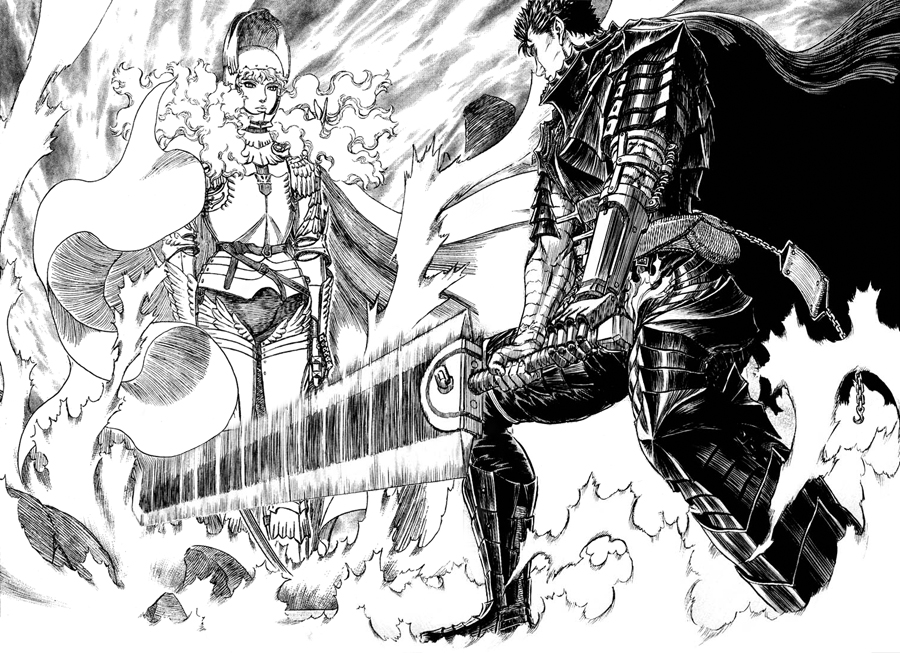