This was the first photoshop project I ever did, literally how I learned to use it, and still one of my old favorites, dubbed Phoenix Rising: So, a couple weeks ago I thought to try and restore, remaster, and/or up-res it and these are the results. The first a hi-res "restoration" more or less in line with the original: The second a "remaster" with some fixes or improvements, solidifying the background color and how it surrounds our subjects, a smoother blur of the rubble behind, and even incorporating original feedback from none other than CnC, who pointed out the multiple light sources were indeed insane (my rationale at the time was the physical rules of the world no longer applied to Griffith =), so I lost the "sun" as well: Threw this idea about the many faces of Cooper together as a gag after the end of Twin Peaks: The Return *SPOILERS*, but then went back and kind of spruced it up enough to be an avatar and toss it in here (there's still a few things that could be better, so I may add or improve more details, but in that case I'll just stealth reupload): 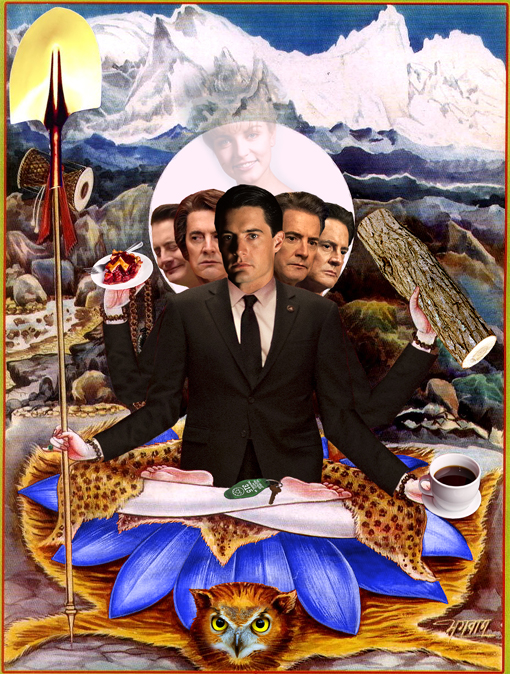 The idea is based on the many sides of Cooper we see over the course of Twin Peaks ala the five faces of Shiva in Hindu art. Here's the base source image, preferred for its Peaky background as well as the viability to more easily photoshop Coopers on it. From left to right: Cooper as "Dougie Jones," the Dougie Jones Tupla, Special Agent Dale Cooper, Richard, and Mr. C the evil Cooper doppelganger. Additions to the rest of the image include Laura Palmer superimposed above them (I should have superimposed a giant image of Cooper's face over the whole thing =), the key to Coop's room at the Great Northern in his lap as he sits on blue "rose" petals on top of a skinned owl, and he holds in his hands a golden shovel, a slice of cherry pie, the log, and no doubt a cup of damn fine coffee. He's also wearing a ring you might recognize.
You must log in or register to reply here.
Share:
Facebook Twitter Reddit Pinterest Tumblr WhatsApp Email Share Link
Top Bottom