Guts' Cannon, flamethrower or what?

I hope this isn't a waste of space cuz I searched and didn't find anything about this.

This has been a question I've been wondering about for a very long time. In volume 1 when he shoots that viper apostle guy it looks like a flamethrower dealy

but in volume 3 or so he shoots it at femto and it looks like it actually shoots something... (another link)

I guess the question I am trying to ask is, how does it work?

Thank you for your time...

Staff member
It's a cannon, which is why it's called... a cannon. It's not a flamethrower, though the black powder does produce flames when he fires it. It shoots balls (shown below), and you can see him loading it in the manga as well. 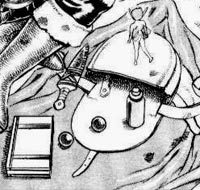 There's no doubt that it's a cannon. The apparent flamethrower effect is probably due to trying to represent gunpowder exiting the barrel (you know the smoke, dust, sometimes sparks and fire). In the very picture you posted (the first one) you can clearly see large chunks of the Snake Baron sent flying and that a portion of his body had been destroyed, obviously a flamethrower couldn't do that sort of damage. As to how the thing works, well a few panels before the second one you posted, we see Guts loading the cannon whilst being taken away by the vortex of souls. He places the gunpowder in from a pouch, then loads in the ball and "clicks" the hand back, then...BANG.

edit: As usual Aaz was the quickest, hope I helped.
N

Ok that cleared alot up thank you ^^

...umm I don't know what else to say besides thanks Oo;