How the Journey Ends

This is by far the best summary I have read, while we all agree that is a shame what happened to Miura sensei, we atleast can find solace knowing that he left the main characters of his history in the best place they could be, in a place where they can finally find peace. the only regret I have is all those questions that were left unanswered on his history.
G

This is a great post. I've been following berserk for almost 20 years (since 2002) and am very sad for Miura, and disappointed that we won't get to see how he would have finished the saga.

I was looking on reddit and found this painting (below); it got me thinking about how even though berserk may not end properly now, in a way, it will become immortal. All 40 dark horse volumes that I have are awesome, and I have never been disappointed in a volume I've purchased. While clearly having Miura finish the story would have been the best alternative, freezing the story (in an unblemished state) is not a terrible thing either. I think of how Game of Thrones was ruined by the last 2 seasons, and unfortunately, that's what I associated with that series now.

Berserk manga was perfect, and while I'm fully confident that Miura could have ended it perfectly, I'm not so confident that those left (even if they have notes from Miura) would be able to do the same.

Here is the cool shrine type picture referenced above:

It's a great picture. Very touching.

I would like to thank you Griffith for this wonderful post. On a more personal level, as others already said in the thread, I joined this community pretty much at the same time when the journey to Elfhelm began, and even if we may never read the end of the manga, I'm happy, very happy that Guts made it, that we have been able to see Casca speak, fight again. And this journey to Elfhelm, I'm very happy to have lived it here, too. Because of family life, work, I had a lot of unread volumes, until I recently caught up to the last episode. Now I really don't know if I would like the end of BERSERK written by somebody else than Kentarou Miura. I'm not sure. But for now, it's tough to realize that he really passed away.
S

This isn't the ending we want...but it's ending we need and you know what?

I'm satisfied and it ties up the journey, it's hardships, it's pain and struggles and it's triumphs neatly in a bow and walks away with a smile.
J

I am also strangely satisfied with how the story happened to end, everything in peace

A very touching and relieving ending for the story. I guess it suits best, as after all those incredibly cruel and insane things Guts got through, he deserves a happy ending, like every other character.
And here are some of my thoughts on the end in the poetic form:
This field has so many tales within -
With its swords' stories carved deep in
Of treachery, brotherhood,deeds
Unseen hopes, salvation and greed

Yet another one is to be born:
Tempered with death right at the start
Severed by loss, haunted by blood
Unyielding, prevailing, failing again
As if it were some kind of gods' foolish game

Bursting with blood, screaming of pain,
But the hands still retain, still retain
The mind's insane, craving more strength
To fulfill your desire - to be free once again

The surge of blood that follows your path
To pay for being branded. Is it not enough?
Having lost all your hopes and dreams in one sight
It's only the reason to growl and fight
But...

That putrid well the world has sunk,
Flattered by devil, created by god.
Resembling a piece, provoking a war
Is this place you are heading for?

Follow your trail in human's diguise
Stay aside and lead a good-family life.
You are not to fathom hopeless depths.
You are here with us - right at the end
Gazing upon a valley with swords
Of all kinds.
With one huge edge hovering over the site
Its enormous steel hasn't met its fate,
But was it to crush another man's reign?
Was it to protect or to attack?
Were you to sacrifice or to get?
Anyway,
Let the story continue in millions of minds
And you deserved it - a somewhat happy flourishing retire. 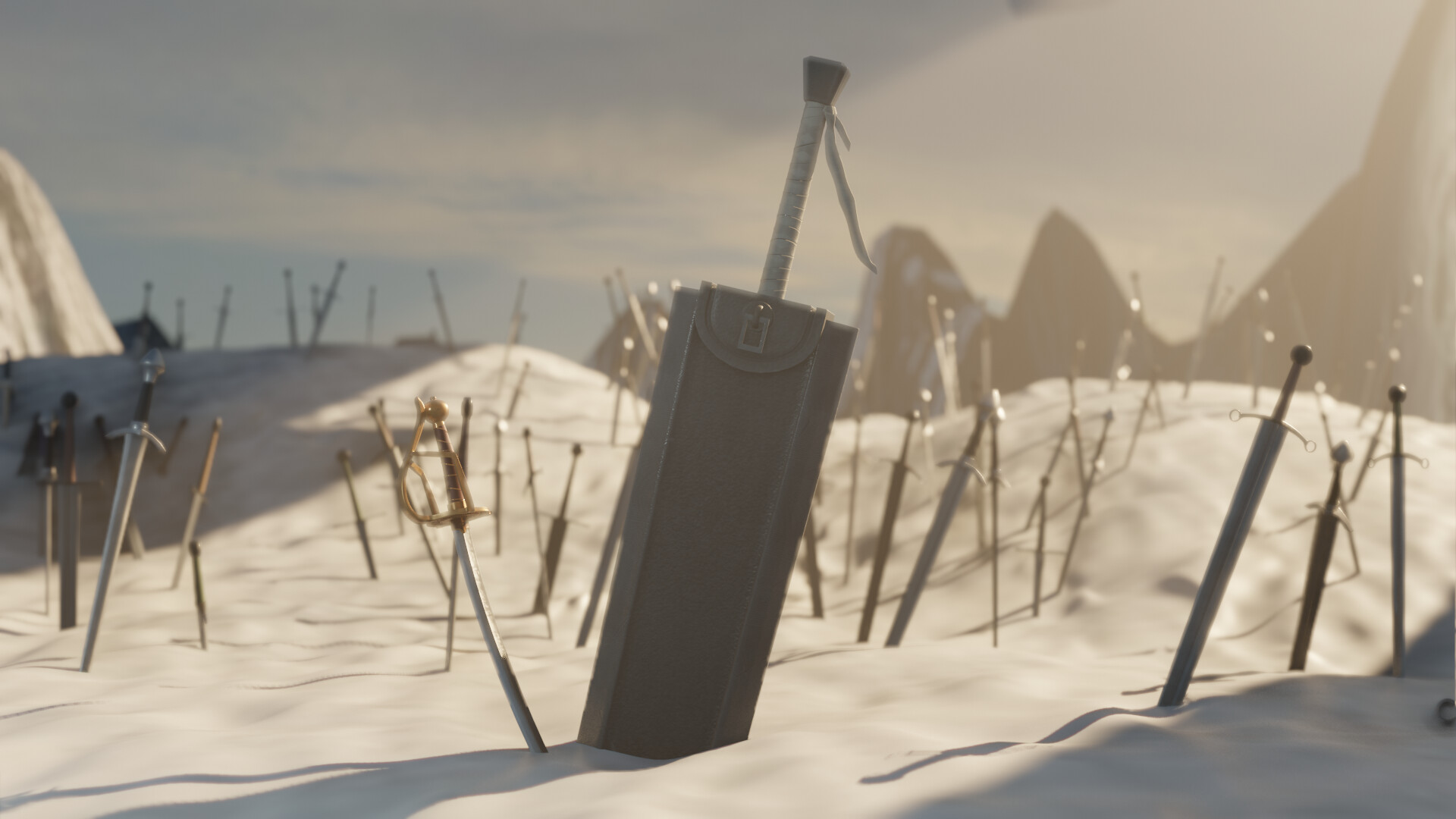