Bleac said:
I can't say I hate Dark Horse, but Berserk could definitely use another publisher for the English speakers.
Click to expand...

Honestly, I really would just like for them (or any other publisher) to invest enough money into getting a good translation done. It's not like it would ruin them either. The problem is that translating manga doesn't pay well at all, so (surprise) it's rare that the job is done well. Of course, even then this particular mistake is quite glaring.


Bleac said:
Btw Aazealh, do you own the French volumes? If so, how are they in comparison?
Click to expand...

Sorry, I don't. My understanding is that the French translation is pretty bad.
W

Aazealh said:
So here's a funny thing: this is a huge mistranslation by Dark Horse. In Japanese, that bubble only contains the hiragana "よ" (yo), a suffix that doesn't mean anything by itself. It can follow any number of words. So in English, the bubble should only contain an ellipsis. 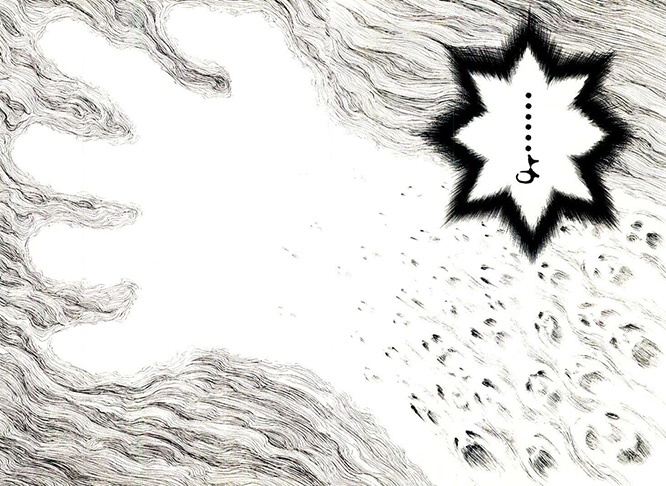 Where do you get the japanese scans from?

MrFlibble said:
Where do you get the japanese scans from?
Click to expand...

Aazealh said:
Yeah. Interestingly, that error was first made here, on SK.net, in December 2000. Back then fan translations were done by people with relatively poor knowledge of Japanese, but they were better than nothing. So we can forgive Cronus, who translated it, for making that mistake at the time. What's very strange is the fact Dark Horse somehow made the same improbable error eight years later while supposedly using a professional translator. I have no proof, but if I'm honest what immediately sprang to my mind was the fact they probably just looked at our older translations (which are still available online but really shouldn't be used as reference) and based their version on that. Two of Dark Horse's editors have had accounts on our forum, and I personally saw one of them, Samantha Robertson, looking at our translations through the logs around that time. They could even have been comforted in their decision by the fact the scanlations of the time (from "thehawks.org") translated it the same way... but that's because they were stealing our translations to begin with.
Click to expand...

On the bright side, Cronus, among others, can lay claim to an official translation of Berserk!

Errors or no, it's a pretty cool feather in one's cap to end up contributing somehow to a work of which you're a fan. I'm going to check if the one translation I helped localize with my friend Aiko ended up word for word in a Dark Horse volume and you can all refer to me as Griffith, Berserk Co-Author!

Speaking of translations, mistranslations, canon, non-canon, and hundreds or thousands of nuances only native speakers can understand... this thread sure highlights that there's been a lot of misconceptions about Berserk over the years that calcify into this sort of weird apocrypha surrounding the series ("this character said this incidental thing, which I'm misconstruing into a big picture concept!" and i'm certainly guilty of this a few times over =) Phrases, concepts and theories borne out of misunderstandings that are complete bullshit and yet are like their own language when discussing Berserk. I mean, how Guts name is spelled was still in dispute, albeit not legitimately, not too many years ago! I think my favorite misconception now is the Idea of Evil no longer being canon because of the irony of anecdotally de-canonizing something legitimate with all the false stuff out there people still adhere to. Anyway, very interesting as usual.
W

Do they sell digital volumes?

MrFlibble said:
Do they sell digital volumes?
Click to expand...

That store only sells digital magazines and volumes, and the link I provided lists all Berserk volumes.
C

Wow this forum has had a lot of discussion. Thanks guy so!
W

On the bright side there are legitamate online translations of Berserk now, so DH won't get away with improvised translations.

I'm looking forward to how they retroactively justify getting Danan's gender wrong.

MrFlibble said:
On the bright side there are legitamate online translations of Berserk now, so DH won't get away with improvised translations.

I'm looking forward to how they retroactively justify getting Danan's gender wrong.
Click to expand...

Dark Horse's monstrous failure isn't that they got the gender wrong, it's the fact they didn't translate the name and just kept it in rōmaji. That was insane.
Translating "花吹雪く王" as "King of the Flower Storm" isn't incorrect, and I think Miura clearly meant to surprise the reader regarding Danan's gender. However Dark Horse chose to half-translate it as "Hanafubuku King", which is meaningless and bafflingly stupid. It's like calling Guts the "Black Kenshi" instead of "Black Swordsman", or Griffith the "Hirakino Falcon" instead of the "Falcon of Light".

And once again, I feel I have to point out that in doing so they seemed to mindlessly reproduce an error that originated here. When episode 237 originally came out, Puella immediately proposed the proper translation for the name: "King of the Flower Storm" (which we ultimately revised as "Sovereign of the Flower Storm" after learning of Danan's gender). But Saiki, who was among those of our members that provided translations for us at the time, wasn't happy with it... but also didn't know how to translate it otherwise. So he left it as "Hanafubuku King" while saying he couldn't think of something proper (he never spent too long on his translations...). In turn, that translation ended up being stolen and used in scanlations. And I guess that inspired Dark Horse to follow suit?

But we knew all along what the proper translation was... And while it's Ok for people on the Internet to be wrong, it's unforgivable for a professional edition to contain that sort of gross mistake.
S

Wow... I've half a mind to go in with a bottle of white-out and a pen and just copy all of puella's translations over top of the Dark Horse versions. Would look kind of ugly, and the sheer volume of whiteout might turn my room into a chemical hazard, but I'd know I had reasonable translations!
You must log in or register to reply here.
Share:
Facebook Twitter Reddit Pinterest Tumblr WhatsApp Email Link
Top Bottom