What was in your opinion the most annoying fad?

If you had to make a list of your top 3 Hirasawa songs, what would they be? I tried to ask myself this question and had a really hard time, so good luck!

What was your admins reaction to Griffith being reincarnated?

Any memorable anecdotes from your jobs? ( I know Walt will have some, since being a reporter gives you many chances

Aazealh, I've heard about how you've read Berserk only once (it's not a question actually, it's purely amazing!) but has there ever been a time when you've gone back to look at an image/ re-read something specific said by a character/ etc.?

How many times have you re-read the manga or gone back and re-read specific volumes only maybe?

Is there a way you mark your volumes with regard to the translations of SK vs DH? In the sense, I was unaware of that small bit of translation that Walter happened to mention in the Rakshas topic moments ago (I'm conscious of the ones since joining the site), and it struck me - maybe I should sit with every episode of old and read it side by side with the SK translations. Have you like marked up your volumes with corrections or this is again, INHUMAN GODLY MEMORY?!?!

IncantatioN said:
Aazealh, I've heard about how you've read Berserk only once (it's not a question actually, it's purely amazing!)
Click to expand...

Where did you hear that?

Anyway, since I'm hungry, here's another food question: describe the contents of your ultimate sandwich!

I just did a Skullcast binge and you've pretty much already touched on all of the questions I asked.

I've been watching some old home movies from '90-'93, and I see items in them that I still own and use. The alarm clock in front of me is over 21 years old. Crazy that it's been kept around that long, but it still serves its purpose. So I guess I have two questions, hope these are new:

Do you pack rat old stuff?

What's the longest standing thing that you've owned throughout your life?

And maybe a little different:

Staff member
We'll be recording SkullKast Episode 23 on Sunday. Any questions that don't pertain to Ep 332 or Griffith?

How do you think Rickert will view the Apostles in Falconia, especially after he and Erica were just saved by one?

Other than all the evil we've seen at the Eclipse, it seems that Miura has taken pains to portray Griffith in a fairly positive light since his incarnation. Do you think it's likely that Miura will continue to portray him in a benevolent fashion as a "Savior," treating the Eclipse and former apostle behavior as simple pragmatism to reach a positive end. If so, do you think Guts could be viewed as the new villain by the world if he comes after him?

Edit: I'm aware that attacking Flora shows his true colors to an extent, but still Miura could've painted him as a more overt manipulator. The ambiguity is what interests me. Griffith seems to have taken pains to appear as legitimate and loved as possible. Could he be manipulating the way the Idea of Evil works, though humanity's collective desires, and if so, how?

"Any questions that don't pertain to Ep 332 or Griffith"

When you started the website, did you think Berserk would be over soon or already knew it was a long series?

TheBranded1 said:
When you started the website, did you think Berserk would be over soon or already knew it was a long series?
Click to expand...

I can answer that with a direct quote on the show. I have it in an archived version of the pre-SKnet forum.

Walter said:
"Any questions that don't pertain to Ep 332 or Griffith"

Whoops, my bad. Must've misread it.

I was trying to organize all of my old YA magazines while doing a little housecleaning the other day, and it inspired the following questions:

What do you do with all of your ancient YAs that you don't want anymore?

Since you're buying the magazine anyway, do you have any manga that you follow in YA besides Berserk? Any that you'd recommend?

Not sure if these have been covered before... my memory ain't so good these days, especially now that there are so many podcasts!

Staff member
I'm going to go ahead and answer your questions directly, Grail.


Grail said:
What do you do with all of your ancient YAs that you don't want anymore?
Click to expand... 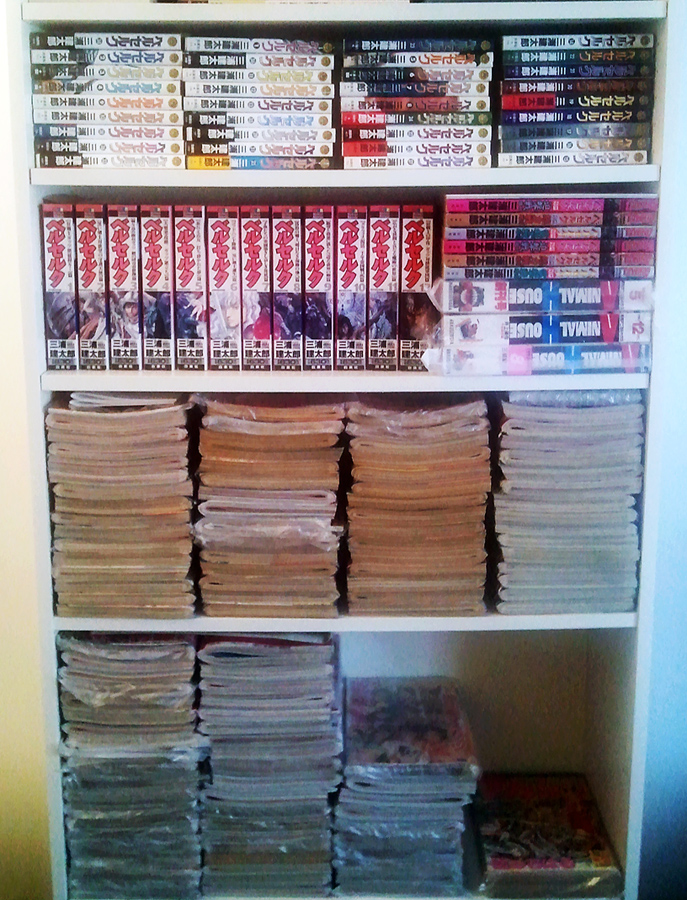 Grail said:
Since you're buying the magazine anyway, do you have any manga that you follow in YA besides Berserk? Any that you'd recommend?
Click to expand...

Spider Sniper & Gekkoh (AKA Cool Beauty Revenger). Older series, but you totally should check them out. TheSkyTraveller was also a huge fan of these two back in the day. Pity she's not around anymore to attest of it.

Aaz what are those fat books on the second shelf down and why don't I have any?

Somehow, I knew you were going to say that.

Looks like you'll be running out of space soon, though!


Aazealh said:
Spider Sniper & Gekkoh (AKA Cool Beauty Revenger). Older series, but you totally should check them out. TheSkyTraveller was also a huge fan of these two back in the day. Pity she's not around anymore to attest of it.

Cool, I will! It's funny, I don't think I've seen these in any of the YAs I've owned. Are they already finished?

Gobolatula said:
Aaz what are those fat books on the second shelf down and why don't I have any?
Click to expand...

Which ones? Those that make a sort of fresco? They're the MBRs released some years ago.

Space is expandible. There are more shelves not shown in the picture.

And a couple drawers elsewhere too. Whenever I run out of space I'll just get another rack.


Grail said:
Cool, I will! It's funny, I don't think I've seen these in any of the YAs I've owned. Are they already finished?
Click to expand...

Hehe, don't bother, it was a joke recommendation. Gekkoh is finished I believe, and last I heard Spider Sniper had moved to YA Arashi. Both are pretty terrible. Personally I only care about Berserk as far as YA is concerned. There have been various series featured over the years that aren't too bad (e.g. Futari H, Cestus, DMC) but I never bothered. March Lion seems neat I guess, but same thing, I haven't checked it out.

Staff member
Been a while, but we will have a regularly scheduled podcast session this Sunday. So as always, any questions? While we're at it, any specific topics you guys would like to hear on the show in the upcoming episodes?
B

Why is there something rather than nothing?

- If Miura died today, how would you feel about the series as it stands? What would you want for the series going forward?

Luckily, we do not have to contemplate such things as they are, but I'm curious. If this question hasn't been asked yet, I can't believe it. So forgive me for being repetitive if it has. Let's turn this question around:

- If you were diagnosed with a life ending ailment or illness, what would be on your bucket list of things to do? What would be your regrets?

Obviously, not getting to finish Berserk. Or maybe I should ask questions more in line with the holiday spirit?

- Have you ever shopped on Black Friday? Cyber Monday? Any past experiences relating to that?

- What do you think about this event infringing further onto Thursday? The consumer attitude of the United States in general?

- What do you think of the holidays in general?

It's that time of year.

Staff member
We'll be recording on Sunday, any random questions?

Would you rather fight one horse-sized duck or one hundred duck-sized horses?

How are the encyclopedia updates coming along ?

"Bring the light of day"

Haven't asked in a while so here it goes:

Embarrassing Movie collections! We all have one or two movies that we know are just bad in any sense of the word. But we still watch them, and we still enjoy them. Let these titles be heard and explain reasons for the attachment.

Seeing as some of us have been out of the typical gaming schedules for X or Y reason. Give a short list of games that have changed or impacted your life as a gamer from oldest to newest