The quiet ones have the most meaningful thoughts.

and Pippin. BTW, we need an emoticon for Pippin

PippinStrippin said:
I voted for

and Pippin. BTW, we need an emoticon for Pippin

I'm not against it, but what would he be emoting? He's generally pretty stoic.

is it even fair that Guts is up on the poll? He is winning by a land slide

I'm not against it, but what would he be emoting? He's generally pretty stoic.
Click to expand...

I know right? Not even when Guts smacked him in the nose with all his strength with his elbow did Pippin react to it. That had to have hurt like hell!

But if you want an idea of pippin emoticon where he is actually emoting I think the scene where he first sense midland's army about to attack the hawks in the field after Griffith's capture, he actually opens his eyes (if memory serves) and yells out about the danger. i think that is the closest Pippin comes to showing any emotion.

It's such a hard choice, but I had to make Rickert one of my favorite next to Guts. The more I see of this character the more I like him! He's turning out to be pretty darn awesome.

I'm hoping to one day see the three remaining members of the original Band of the Falcon, Guts, Casca, and Rickert serve Griffith his comeuppance!

I had to go with

I love the moments they have together, especially when Schierke helps Guts when he's using the Berserker Armor.

One particular scene that always brings a smile to my face is the one where Schierke and Sonia are sitting on the dock talking to each other, and Sonia replies to Schierke saying "I say it's love!"

Guts because he's one of the few characters (along with the bakiraka) who in every situation, no matter the circumstances, only relies to his own skills and never to a god or messiah. The perfect example is the incarnation cerimony at the tower of conviction. When everyone in moments of despair only prayed hoping that some god would save them, he stood without retreating against the monsters, and this influenced everyone who was near him, in particular Farnese. I read somewhere that there are similarities between him and the concept of the Ubermensch of Nietzsche.
I generally don't like main characters and heroes, but Guts is an exception, after all the suffering and horrors that he endured i think its impossible to not sympathize with him, i just hope that at the very end he will get the happiness he deserves.

And Void partially for his scary but awesome design, but mostly for all his epic quotes at the eclipse, such as : "If fate transcend human intellect, it is inevitable that humans, bearing evil, oppose their destiny". I think that this is maybe the most important line in Berserk, because it describe what actually happens among humans, some of them have the strenght to accept the cruel destiny given to them without commiting atrocities, and others can't accept that you can't always get what you want. Void's backstory is what i'm waiting more eagerly than any other thing in Berserk.
P

I sacrifice my ''Personal Text'' for eternal life.

Guts because, well, he's goddamn Guts! Zodd because of his design (my favorite Apostle design) and for the fact he doesn't give a damn about anything or anyone, he just enjoys killing, like a true Apostle.

BTW walter or aazeal did the mask from Mario 2 inspire Serpico's face icon?

BTW walter or aazeal did the mask from Mario 2 inspire Serpico's face icon?
Click to expand...

Wow, clever catch! (Here's what she means for those who are curious).

That emoticon is one of the oldest, so I can't remember if it was an intentional thing from the start, or a joke we made afterward, but that reference has definitely been brought up before in our internal chats about emoticons

My two favorites are the power houses Guts and Griffth.

I love how complex both characters are...both opposites but at the same time share the ability to draw people to them. An charisma and presence that inspires, awes, amazes and changes people. Griffiths goal driven personality and eventually his rise, fall and transformation is such an incredible part of this story and really adds to why I love his character so much.

Anyway it was close second between Judo, as he seems to be Guts closest friend during his time with Band of the Hawk (after Casca/Griffth) and he is always humble. He gives great advice and comfort to Guts all whilst keeping a level head. Miura also gave him some great dialogue at parts. Also redeeming quality is that he wants Guts to be with Casca despite his own feelings for her, Knowing she needs someone and something he can't give. RIP Judo ;)


Surprises for me: Ganishka and Locus are so low despite the fan popularity among them!

... but who can really say they didn't expect that?
S

Pretty obvious choice, but went for Guts and skull

Both are just amazing characters. Guts' unbreakable will to live and fight is his most inspiring feature. It just doesn't matter how crippled he is and who he's fighting, he won't let down

seeing his pain in the form of darkness pushing thru anything is also very pleasing. This dual personality feature is also very interesting. An enormous pain he remembers everyday and once in a while releases in the form of pure strenght. His lonely wandering and refusal of feeling always catch me. as well, remember that panel of him sad (the only post-eclipse), always found it silly. When I finally read that episode and saw that face... damn feels

SK is always so cool because of wisdom, always having something useful (and dramatic) to say. I like how he eventually helps (crucially sometimes) but follows his own way, watching and learning. Wish we can learn more about him in the future.

Poor Conrad ... zero votes and the only Godhand not to be on the emoticon-fixed-list!

IncantatioN said:
Poor Conrad ... zero votes and the only Godhand not to be on the emoticon-fixed-list!
Click to expand...

jackson_hurley said:
I used to dislike Ubik in my first readings, but with time and many many many reread, I've come to enjoy him more.
Click to expand... 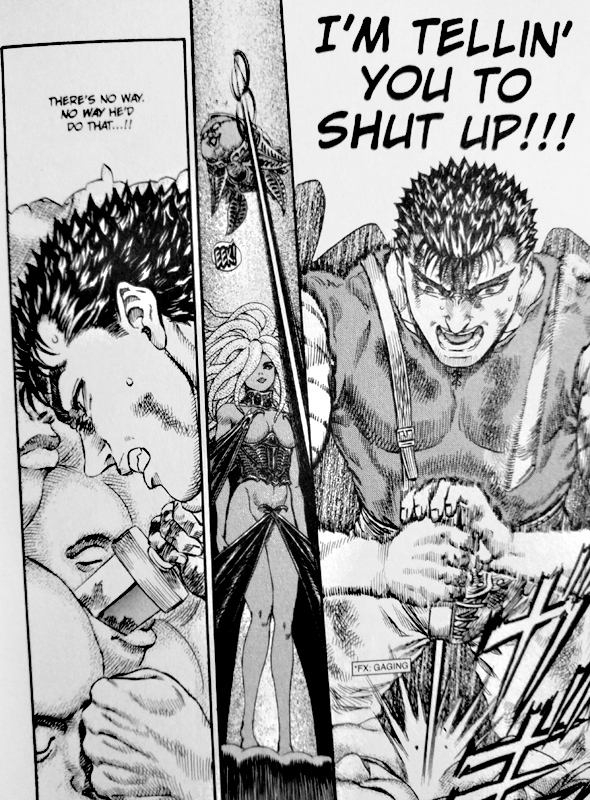 Yeah well in the beginning only! Now I really appreciate Ubik. Not sure really why I did not enjoy him in the first place. I was young in those times.

Easily the two most interesting characters in the whole series imo. The thing i like about both of them is how emotionally charged they both are. Even in her childlike state I love that Caska can make my heart ache when she calls out to her child, or freaks out on guts, or says Au lol.

As for Guts...man speaks for himself.
D

I'm Noah. I love my waifu and my friends

I chose Slan and Silat. Guts Puck Farnese and Schierke are other characters I love but Silat and Slan need more love.

Puck is my favorite character. I adore this little guy

Berserk wouldn't be the same without him.

of course. Best protagonist to have graced manga.
D

Guts and my home boy Irvine