Prince Waller beside the King

IsolatioN said:
whew. I'm not too fond of spiders (one of the only things I squeal like a wuss around). Luckily where I live the biggest ones we get are the size of your thumb nail :)
Click to expand...

Everyone has really nice pets ^^ makes me wish i didnt have to give my dog up. Keep on postin its nice to see everyones animals.

Proj2501 said:
The newest addition to my household: A Wolf Spider (the size of a half dollar) I FOUND IN MY ROOM!

Hahah, awesome. Kudos to the cat.

Nooooo Tiny.  You lived a soldier ans died to an hero.

My cat loves to eat spiders too.

She lost her eye to pneumonia complications when she was a lil stray kitten.  I renamed her Gally when I got her, after Gunnm (Gunm?  Well, you know, Battle Angel).
Y

Lithrael said:
She lost her eye to pneumonia complications when she was a lil stray kitten. I renamed her Gally when I got her, after Gunnm (Gunm? Well, you know, Battle Angel).
Click to expand...

If only it were the other eye...

Lithrael said:
Nooooo Tiny.  You lived a soldier ans died to an hero.

My cat loves to eat spiders too.

She lost her eye to pneumonia complications when she was a lil stray kitten.  I renamed her Gally when I got her, after Gunnm (Gunm?  Well, you know, Battle Angel).
Click to expand...

Yeah, totally reminded me of guts.

She was the size of that bottle cap, now she's grown quite large. She's going to grow a radius of 6 inches, which is awesome. Wow, watching her grow has been interesting to me, when I first got her, she was very very tiny and now she's the size of a average size adult tarantula even though she's still a jouvie. her names Vicious, since she's very aggressive, that's her skin in the second pic.

recently, she's dug hole deeper in the tank, created a big ball of dirt and web the size of my fist and shoved it in the entrance. She did this because my roomate left the light on and it got up to 100 degrees. Afterwards I had to immediately buy moss and put it all over her cage soaked in water. She came out and picked up a handful of the moss to put in her cage and moisten herself and then she took the bowl I have in there and put it in her home for awhile till she drank all the water.

Good old Trenchi Jr. He died when he reached male maturity... Male tarantulas die soon when they're sexually mature, they're only purpose is to have sex... and the sad part was I didn't find him a mate, but he was the most awesome and nicest tarantula ever. He used to crawl right to your hand once you opened the cage, and when he was tired, he's jump back into it.

Precious at 12 years old. She is now 14, and has grown lots of more grey hair over her face... it's really depressing for me, she's growing very old and has fatty tissues growing around her body, possibly turning into cancer... She's been with me since I was 4 so it's just devastating to know she's getting really old. She still howls and gets very excited when I come back from college, and it makes me cry inside because knowing she's not gonna be around like that forever. In all, she's been a great dog and is pretty healthy for her age.
R

I've got a parrot back in Trinidad, Left it with my grandparents. I'm going there next week, I'll try to get a picture

I love your dog! I used to have one that looked allot like it.. I know how sad it can be when pets start to get old..

Lith, you have such an awesome cat! Like CnC said.. if only it was the other eye

*shudder* Guh. In my world view, the only reason a 'pet' spider doesn't eat you is because it's not big enough. I can't see that as a pet, but hey.

I've got myself a real sweetheart of a golden retirever named Ferdinand, or Ferd for short. He's about thirteen, and his health is starting to go on him; hips and such, and I'm two hundred miles away at college.

He always perks up when I visit home though, so he's got plenty of life still in him.
M

This is my dog Rambo, picked him up from the shelter a few years ago. Best we can tell he's part pitbull.

Metal Soldier said:
This is my dog Rambo, picked him up from the shelter a few years ago. Best we can tell he's part pitbull.

Haha, he reminds me of Ein in cowboy bebop. 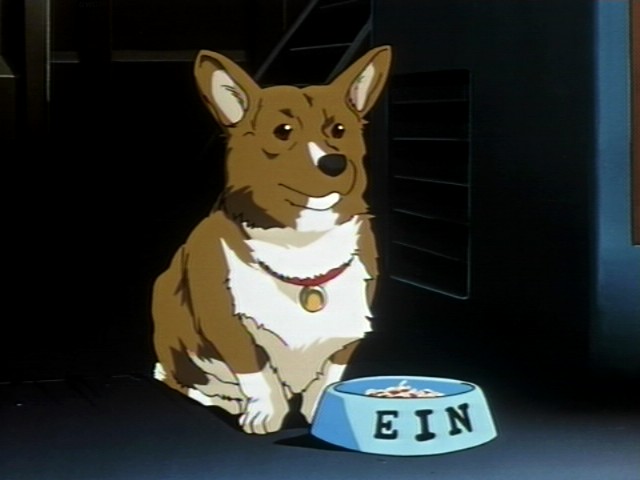 Ein was a Welsh Corgy.

Yeah, I want one. Well just because he's a welsh doesn't mean Rambo can't remind me of him.
P

This is an old picture of my dog with a squirrel on her bum!

Here is a very shot and fast video of my Pupp Apollo doing a trick. He understands hand signs and voice commands, pretty smart pup.

Sadly he is being raised to be eaten within the next few years...

Can you guys guess what Anime his breed has appeared in?

SlimJ87D said:
Can you guys guess what Anime his breed has appeared in?
Click to expand...

Yeah... haha, good job. Did you enjoy the series?

Yeah, it was pretty nice. Its popularity is well deserved. Last time I saw it was around 1999 though. Time flies.

Monster adventures on the high seas!

Oh wow, lol, they look so sophisticated for Guinea pigs