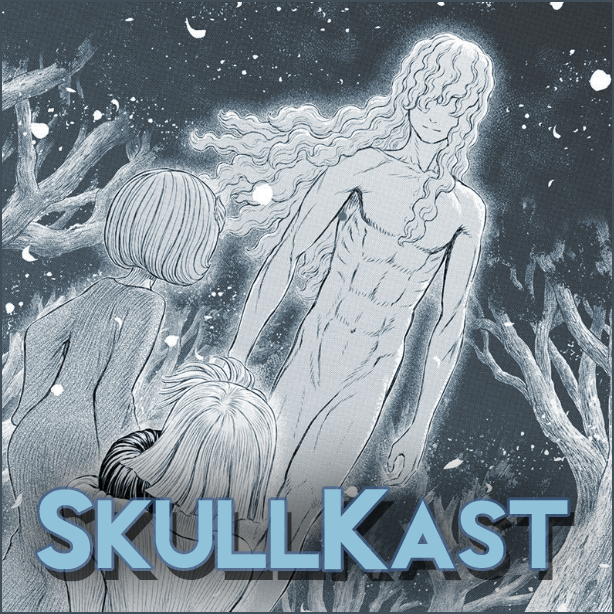 The whole crew works together to make sense of the last few chaotic pages of Episode 367. Why's Zodd here? Where'd Schierke and Farnese go? And what would Griffith want with Casca? Come on, most of these are softballs. But hey, listen and you might learn something! A few stumbles aside, excitement is building as the veil over Berserk's future is finally starting to lift.

Like the show and want to support our translation efforts? We've got 17 mini-podcasts available right now—with new releases each month. Check out the details on our Patreon!

"But that Wrath.. is His Rancor directed at griffith? Why?"

Loved the podcast. Despite the issues of the continuation, it's nice to hear you guys getting excited over new developments and making jokes. I like that we can still enjoy berserk and it feels reminiscent of when Miura was still with us.

I think you guys nailed it with the logic, sequencing and panelling being confusing and poorly directed, especially the action scenes. Even if the Berserk crew are in over their heads I would expect those fundamental pillars of story telling and continuity to be a lot better.

If they are that inexperienced in directing action/sequencing perhaps they should have hired another Manga writer to help with that side of it. I am sure a bunch of talented writers would be honored/slightly terrified to oversee the early storyboarding process. Is the problem that there is no real experienced leader on the team? Is Mori only providing story beats? I am honestly baffled, perhaps they are just rushing to get it done.

Really good pod. I was actually thinking the Berserk armour would activate and we would get a more insane fight between Guts and Griffith with the armour activated, its literally Griffith standing right there, its true it just makes no sense for it not to activate, unless for some reason they wanted to have Guts's face visible. With the armour activated i think Griffith would still be unable to be hit etc, and the scenario would be similar but what if he snapped out of the armour once he saw casca was in danger as the sword was coming down, i also like Griffith stopping the blow too because of the boys interference. i was also thinking it would be more impactful for me if Griffith would have transformed into Femto during a pivotal moment in the fight, imagine the image of Femto picking up Casca not his human form and Guts seeing it, imagine how Guts would feel after all this time, what has changed since the eclipse? he still cannot protect her from him, it would be overwhelming for Guts, that's still here but i think it would be cooler if it was femto. then the ground could fall and stuff. Guts's facial expressions are lacking in my opinion too, I remember at the hill of swords how interesting and varied his facial expressions where, for example when Griffith saved Casca his face was filled with different emotions, but so far the expressions feel flat, it almost makes me question if this moment is really that big of a deal to Guts which is not good at all.

Also with the Guts and Zodd fight they could have just had one more page of the fight after cutting from Danan and have Zodd charge Guts, Guts's at the corner of his eye see's Griffith walking towards Casca... Guts knows he has to act so Guts dodges Zodds charge and makes him get his horn stuck in a tree, then Guts runs towards Casca and Farnese and Sheirke, and he is shouting get back! But Griffith actually puts his arms around all of them including Casca, and it shows Guts as the aggressor trying to attack his friends and Casca, and then maybe Serpico and the others would see this, but then Griffith picks up Casca alone and the episode ends.

Guin said:
Also with the Guts and Zodd fight they could have just had one more page of the fight after cutting from Danan and have Zodd charge Guts
Click to expand...

I agree that if they just fleshed it out a tiny bit more, the flow of the episode would be much better. Having atleast one more page of guts fighting zodd would definitely have left more of an impact and fleshing these scenes out a bit more I dont think would go against mori's plan which is to only show what Miura told him. They are already stretching events on their own. Might as well stretch them out with cleaner execution and thought.

A page of Zodd charging Guts and Guts dodging around would be good, and even a panel of Farnese and Schierke being pushed aside (probably replacing the one of Griffith leaning over on page 7) would go a long way towards making the whole sequence more coherent.
You must log in or register to reply here.
Share:
Facebook Twitter Reddit Pinterest Tumblr WhatsApp Email Share Link
Top Bottom