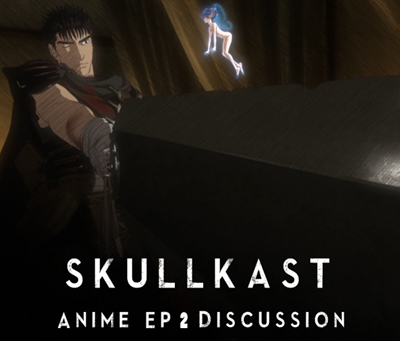 Things go smoother in the second episode of Berserk's latest animated adaptation, but it also gets a bit weird. Hear Walter and Aazealh's impressions of the latest episode and the immediate future.

Am i the media ad guy? My 1st few posts go over that and i will return to the topic once i see the Blue Ray numbers.

I assume that GEMBA https://www.animenewsnetwork.com/encyclopedia/company.php?id=7373 is doing the 3D and Millepensee https://www.animenewsnetwork.com/encyclopedia/company.php?id=11902 + others are doing the 2D, regarding the inconsistencies. The 2D people probably don´t have key frames to work with.
PS: I expect no

. The whole post 2012/13 Rube Goldberg Machine is too complicated already.

residentgrigo said:
I assume that GEMBA https://www.animenewsnetwork.com/encyclopedia/company.php?id=7373 is doing the 3D and Millepensee https://www.animenewsnetwork.com/encyclopedia/company.php?id=11902 + others are doing the 2D, regarding the inconsistencies. The 2D people probably don´t have key frames to work with.
Click to expand...

I don't mean to derail this thread by going into irrelevant technicalities, but that makes no sense. The animators that work on the 2D portions of this anime (subcontractors or not) aren't inbetweeners on an island with no communication to key animators, what you're suggesting isn't how it works. The disparity in style between the 2D portions is most likely due to animation directors having no time to correct relatively short 2D scenes so that they'd fit a single style that would still stick out in relation to the 3D parts anyway.

If you meant that the various subcontractors don't have model sheets for characters that probably won't show up in 3D, like the Golden Age flashback characters, I'd say that's not impossible, but it was still very much possible to fit everything into one single style if they had the time or budget.
B

For the most part I echo the sentiments of this analysis/discussion; the narrative elements are much stronger in this episode, but the visual presentation and sound design hold it back. I'm not so concerned about literal adherence to the manga (adaptation being what it is), but this anime isn't plugging the holes it's created so far. If they're going to do approximately 13 episodes in this season, I think they'd have been better off just doing Black Swordsman and Lost Children. Despite rumours, I do suspect it'll be about 13 episodes, given that a 24+ episode season should provide them with ample space to adapt without leaving anything major out.

Blessed. said:
Despite rumours, I do suspect it'll be about 13 episodes, given that a 24+ episode season should provide them with ample space to adapt without leaving anything major out.
Click to expand...