IncantatioN said:
Thanks for that. To me, the way you put it sounds a lot more rewarding of an experience to have had than a casual or the run of the mill horror movie. IT Follows is great too because as much as it's newly made, it's very retro in both soundtrack and plot (back in the day things used to be a lot simpler like the plot in this one). I loved it and re-watched with my brother (who hadn't seen it) just last month.
Click to expand...

Man the sound track is so good. I bought it as soon as I left the theater! lol

Bone Tomahawk had one of the most insanely brutal death scenes ever made. Pretty awesome movie too.

Also props for It Follows. I watched it a few times last year. Pretty original horror movie, but the style and soundtrack (as said above) were really friggin awesome. Not a perfect horror film, but a damn good one.

Greetings boys and ghouls! I've got a new group of horror movie reviews to share with you so grab your crotches because I'm going to scare your balls off.

So there's a new Annabelle movie coming out soon. Since I had only seen the first Conjuring film way back when (thought it was meh), I decided to dive back into the series by watching The Conjuring 2 and the first Annabelle.

The Conjuring 2 was pretty bad. The characters were stupid, and there wasn't any weight to anything happening. A ghost literally threatens to kill one of the characters, and there wasn't a single part of me that felt like the character was in danger. There was one cool thing about the first part of the film (the Nun, who's getting its own spinoff movie), but they even ruin that by the end of the film. The scariest part of the film was the limp dick plot twist. And that was only terrifying because it meant the film was going to drag on even longer.

I'm currently watching Annabelle so I guess I shouldn't review it yet, but so far so suck.

I also watched The Midnight Meat Train which I actually really liked. The girlfriend bits were completely unnecessary, but the rest was cool. I liked how, sans one scene, the film is just as gory as the Saw films, but they do it in a more unrealistic (or stylistic) way so it blunts the disgusting aspects. It's a fun popcorn flick.

Yesterday I watched Lights Out which I thought was good and creepy as fuck. Finding out every single detail of the creature's backstory made my horror bone a little flaccid though. I wish they had revealed just enough for us to connect the dots.

So at this point you're probably thinking these reviews really suck. First off, fuck you. And secondly, you're right. All of this was just an excuse to mention the following. . .

It Follows. If you haven't seen it then stop whatever you're doing and go get it right now. I'm dead serious. Drop the lotion, pull up your pants, and watch this film. It's got like a 97% rating on Rotten Tomatoes. It's incredible. The plot sucked me in, but the film pulled me out four or five times because I'd think things like "wow this directing is great" and "holy shit this soundtrack is amazing." That's how good it is. Seriously, why the hell are you still reading this?! GO WATCH IT!

Skeleton said:
Greetings boys and ghouls! I've got a new group of horror movie reviews to share with you so grab your crotches because I'm going to scare your balls off.
Click to expand...

The Conjuring 2 was pretty bad.

I'm currently watching Annabelle so I guess I shouldn't review it yet, but so far so suck.

I also watched The Midnight Meat Train which I actually really liked.

Yesterday I watched Lights Out which I thought was good and creepy as fuck.

Agree with everything you said above.

Skeleton, I recommend you check out The Void (saw this last weekend and was meaning to write about it), Raw, The Wailing (stick till the end), The Eyes Of My Mother, and if you're a Kiyoshi Kurosawa fan - Creepy (to me, it marks his return to form and I finally got to watch it earlier this year ... more of a Thriller though). IT Follows came out last year ... so I'd also recommend Green Room if you haven't seen it yet.

IncantatioN said:
Skeleton, I recommend you check out The Void (saw this last weekend and was meaning to write about it), Raw, The Wailing (stick till the end), The Eyes Of My Mother, and if you're a Kiyoshi Kurosawa fan - Creepy (to me, it marks his return to form and I finally got to watch it earlier this year ... more of a Thriller though). IT Follows came out last year ... so I'd also recommend Green Room if you haven't seen it yet.
Click to expand...

Thank you for the recommendations, my friend! I haven't heard of any of those so I'm excited to hunt them down and watch them. Expect a full report once my mission is complete! :)

My friends and myself are huge horror fiends. We tend to hunt for the worst, laughably terrible horror and the legitimately unnerving and creepy horror we can find. Few in this thread I've never heard of and will have to check out.

My friends and myself are huge horror fiends. We tend to hunt for the worst, laughably terrible horror and the legitimately unnerving and creepy horror we can find. Few in this thread I've never heard of and will have to check out.

Feel free to post in this thread when you watch one you haven't seen yet or just want to talk about one you have! I'd love to see this thread come to life like Frankenstein's monster! :)

So Netflix finally (FINALLY!) added the original A Nightmare On Elm Street to their online service. Man I love that film. I'm not a big fan of the ending because it doesn't make much sense. I would've preferred the first alternate ending they filmed where the entire film really was just one big dream.

ANoES is a girl's nightmare influenced by the Freddy children's rhyme. And it blows me away how Wes Craven subtly weaved the rhyme into the film. Take the rhyme's third line (5, 6, grab your crucifix) as an example. Nancy's friend's crucifix is focused on and interacted with a handful of times by Nancy. I really like stuff like that.

I definitely will be contributing to this thread in the future hah.

I'll probably be going over to my friends place this weekend or the next and I'll bring up a few movies I've seen in this thread.

October's here and I'm trying to find decent to good horror movies to watch, movies I haven't watched before. 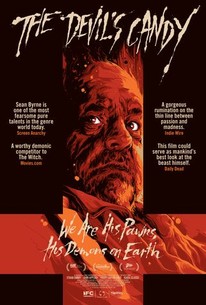 The Devil's Candy is decent, predictable but it didn't feel like a complete waste of time. I liked the fact that it revolved around a metalhead dad with his metalhead daughter and evil lurking around. So metal! Jokes aside, the soundtrack's decent and it's well filmed, acted and atmospheric enough to appreciate it. It's a story done so many times - family moves into a new home, shit happens. That's the basic plot but there's a bit of suspense and underlying terror that pulls the movie, making it watchable, enjoyable. Solid 7/10.

My wife and I recently watched the 1990 IT miniseries and the new movie. Her on IT via the 90s version, "It was less scary parts than I thought and more about nostalgia." I told her she basically just nailed Stephen King. The new one had kind of an awkward first half but came together well enough in the second. It was ok, nothing embarassing, but I don't really see what the box office fuss is about either. I kind of thought the cheesy 90's version was better, at least its rendition of the kids' story. They actually seemed like kids in that one while here Bill, Bev, and Richie are already like adult characters, and the rest of the kids are marginalized, Eddie and Ben aren't critical (despite Ben basically getting Mike's role too), and Mike and Stan might as well have not been in the movie. Anyway, Tim Curry was also a better Pennywise obviously, like an actual scary child predator, wheras Skarsgard's version is over the top and a bit cliche with all the frantic quavering and warbling. I didn't buy those kids overcoming him either; the 90's version cheese scares, yes, but this version is so big and bad it would be like pretending not to be scared of a real monster, or like an attacking bear. Those kids would be pissing their pants, and it actually seemed more physical than anything, like seven kids is all it takes just to physically kick Pennywise's ass.

We also saw Get Out, which actually lived up to the hype because it had all the sharp social satire as advertised but at its heart a horror premise and twist that would work in any scenario, and it was elegantly constructed to present and deconstruct both simultaneously. Very cool.

I'm going to go see the new IT movie sometime this weekend with a few buddies of mine. Hopefully it lives up to the hype.

I saw the original one quite a long time ago, and liked what I saw.

Griffith said:
It was ok, nothing embarassing, but I don't really see what the box office fuss is about either.
Click to expand...

This is exactly what I thought. I won't deny that some of the jump scares worked very well on me, but beyond that I found the movie to be nothing spectacular (and the CGI in some parts really took me out of the movie)

Hereditary comes out next week, here's a trailer for it - https://www.youtube.com/watch?v=V6wWKNij_1M

Looks promising and I'm going to have to check it out cos it's made by the folks who did The Witch - a movie I liked through and through.

There were 2 fun movies I hit up that were on Netflix - The Ritual and Creep 2. The Ritual was a bit of a slow burn horror in the woods film following a group of good, old friends. Of course, there's a bit of a disagreement among the group members but that's just surface level of what's going on in the background. The outcome isn't exceptional or surprising but it didn't feel like a waste of time because of some of the visuals and atmospheric moments. Definitely check it out if you can. Creepy 2 was a step up from Creepy ... it's all about jumpscares like the first movie and this takes it up a notch in the weird area. What scared me with the first one was not knowing what the character was capable of or what he'd do or how far he'd go. Knowing all of that and going into the sequel I was afraid it might not click but the movie still managed to connect thematically and up the ante a bit.

Also hit up The Endless in April which was a lot of fun - https://www.youtube.com/watch?v=_DTbx7c7ez8

The protagonist's are two brothers who go back to a UFO death cult when they receive a video from the cult. They'd left the cult about 10 years ago and the younger brother really wants to go back and check it out - for closure. They go back to find some old friends and things get weird as time passes on. If you're interested, there's an easter egg if you're familiar with the writer/ director's other movies ; )