The Thread of Zelda

All I want to do is...bicycle.

Nomad said:
maybee Im wrong here... but it only said Legend of Zelda @ the tittle in the preview... is this a remake of the 1st one... or am I just being a dumb-ass?
Click to expand...

The first 'Wind Waker' trailer did the same thing, so I think it's safe to assume that it's not a remake of the original. I imagine it's supposed to increase the mystique of the game.
S

i think zelda games are very good. back when super nintendo was the big thing and they came out with zelda: link to the past, or something like that, i beat it a bunch of times and i loved every minute of it. zelda is the shit, when it comes out i am going to get it the first day it does come out.

Vampire_Hunter_Bob said:
I'm going to play it either way, I just hope it has better replay value then Ocarina of time. :-\
Click to expand...

even with no replay value I beat that game 10 times or so. That and the master quest. I <3 Zelda games.
C

Century-slayer said:
i think the name is like that because they still havent choose a title either way it would be crazy if its a remake of any of the zelda games
Click to expand...

It's not what? not a remake? or it's not unnamed?
D

Nintendo's new look for Link will be on shelves next year.

Just after the end of E3 2004's first day, Nintendo held a roundtable discussion so that the press could hear from the director of Wind Waker and Link's new adventure, Eiji Aonuma. During the event, Aonuma confirmed that the new Legend of Zelda game unveiled at Nintendo's pre-E3 press conference is currently scheduled for release in 2005.

Additionally, this game is the same game that Aonuma referred to as "The Wind Waker 2" back at the Game Developers Conference in March. The game won't be called The Wind Waker 2 when it's completed, and won't be a sequel to the last GameCube Zelda game.

Link is said to be a teenager in this new adventure. Additionally, Link's horse--not confirmed to be Epona--is said to be a prominent element of the gameplay. We'll have more on The Legend of Zelda as it becomes available.

Jesus cries when he looks at me.

Does this mean our young hero will submit to his teenage hormons hes been holding back so long on Princess Zelda?

DemonX said:
Does this mean our young hero will submit to his teenage hormons hes been holding back so long on Princess Zelda?
Click to expand...

Why can't you just go make a doujin where link screws zelda, and be done with it?

I THINK I saw a video of this. It had Link and Ganondwarf or whatever fighting and that was it. Oh and I haven't seen that trailer on the site yet so I hope didn't just make an ass out of myself. Anyways, the screens look pretty friggin amazing. I probably will buy a cube for this one.

Is it just me or does the castle theme bring back memories of the game Medievil?
G

Anyone a fan of Zelda games? I was a bit disappointed when I heard that the Twilight Princess was delayed until the end of 2006. Although it seemed like a quick decision, Nintendo has barely disappointed us with its delayed games. I think it is better for Twilight Princess to be delayed and improved than it to come out and end up being a terrible game. I would like to hear anyone's opinion on the delay.

Staff member
I like the Zelda series and am waiting for Twilight Princess. Not possessing a GC, I'm thinking about playing it on Revolution, if I decide to buy it that is. Consequently I don't mind any delay, and in general I prefer that a game be delayed instead of rushed while still incomplete.
I

Agreed. I would much rather have the game delayed for awhile then released in a state where the developers feel that their entire "vision" wasn't complete. I don't mind waiting, because I have never been disappointed with any zelda title before. I look forward to playing TP. Heh, going to have to bring out my Gamecube and dust it off for the occasion :)
M

The can opener went bye-bye...

GriffithZero said:
Anyone a fan of Zelda games? I was a bit disappointed when I heard that the Twilight Princess was delayed until the end of 2006. Although it seemed like a quick decision, Nintendo has barely disappointed us with its delayed games. I think it is better for Twilight Princess to be delayed and improved than it to come out and end up being a terrible game. I would like to hear anyone's opinion on the delay.
Click to expand...

I shall find the crystal of peace

If I remember correctly, OOT was delayed too (please correct me if I'm wrong) and I have yet to find anyone who was dissappointed with it. I agree with what's already been said, I'd rather have it be perfected than rushed to store shelves, too many bad games have been rushed. I'm a big fan of the Zelda series, and I can't wait to get my hands on this one.
L

having a game rushed to the shelves is never good.  ESPECIALLY if it has anything to do with Legend of Zelda.  Those games are the only thing that come close to my fanatical admiration of Berserk.  but yeah.
can't wait for the game to come out. its gonna be so sick.

dude, the revolution will be pretty cool. who's to say if it really be revolutionary or not, but hey i have been a nintendo fan forever and have only been really disappointed with the Virtual Boy.  and Gamecubes aren't so bad to have, but since the revolution is supposed to be all backwards compatible and stuff, there isn't really much point in picking on up unless in you're into novelties right?

The one and only severed head

I'm quite honestly getting sick and tired of people saying, "This [game, movie, whatever] will be release at exactly [this time]," and then moving it back when they realize their goal was rediculous. I don't even want a release date if it's announced more than a month ahead of the release. I'm fine with predictions if their labled as predictions, but I'm really tired of all the teases in the entertainment industry doing this.If you don't know when it's coming out, then say so. Dont give us some piece of crap release date that will end up as a big fat lie.

Vaxillus said:
I'm quite honestly getting sick and tired of people saying, "This [game, movie, whatever] will be release at exactly [this time]," and then moving it back when they realize their goal was rediculous.
Click to expand...

Developers and/or editors very rarely do that 2 years before the game actually comes out. They say: "Twilight Princess' estimated release is currently Q3 2006". Then if it's delayed they change their statements. The people overconfidently giving out precise dates are game magazines/sites and PR guys that say bullshit to pressure their concurrents 60% of the time anyway. I wasn't surprised at TP's first delay, and the move from Q2 to Q3 2006 really means nothing to me.

Now what bothers me more is failed hardware releases because of low stocks like what happened to the Xbox 360 and NDS Lite, or irrealistic console release dates and complete denial of any possible delay while issuing contradictory statements at the same time, like what Sony's currently doing with the PS3. Plus the fact that the Playstation and Xbox have a tendency to be made using cheap components, (too) often resulting in hardware deficiencies.

The one and only severed head

Thanks for the clarification, though I've had a fair share of companis doing that as well. I suppose it really just falls on to the consumer (me) to just plain ignore those dates.
Y

It apparently is compatible with the Revolution Controller

One more reason why I can't wait for the Revolution

Well that certainly explains the delay. Cool news! I can't wait for it.

But right now, I am pre-occupied with anticipation for Oblivion. Only 4 more days!!! 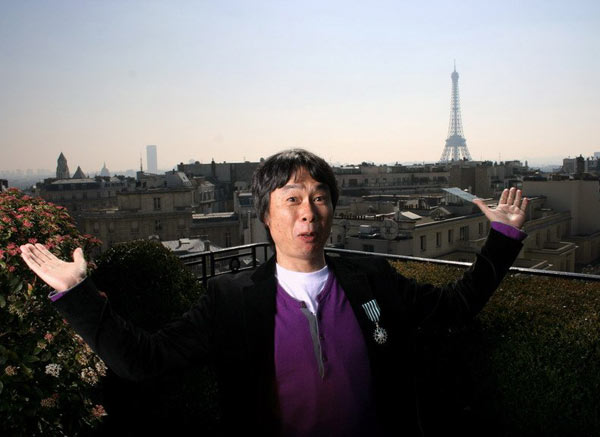 Isn't that a picture from when Miyamoto got knighted in France? Hilarious pic there, Aaz.

yota821 said:
Isn't that a picture from when Miyamoto got knighted in France?
Click to expand...

Yup, one of many.

IsolatioN said:
But right now, I am pre-occupied with anticipation for Oblivion. Only 4 more days!!!

Me too Me too. Its gonna be awesome.. But buying a laptop that will be able to play it.. $1600 minimum

By the way Horseback riding will be great in the Twilight Princess. Oblivion will have it as well but the ride was too bumpy for first person view so fighting on horseback will no longer be a option in Oblivion.