Was very happy with the pricing. Ended up with the bloody EX as well.

Competition is always good and in the end, the fans win.
M

I haven't had much interest in posting any further comparisons, but with official pictures and measurements out I feel it would be a disservice to not update the crude quesstimate I made with the risk of it coming off as misleading or willfully erroneous.

P1 Guts' height is pretty accurate. The official numbers is slightly bellow 90 cm (emphasis on slightly), and my own production piece is a few mm less than that.

The first two comparisons I made were a bit too generous regarding F4F Guts' size, cause the (little) information from conventions we had proved to be incorrect for one reason or another. The obvious answer is that it was wrongly or haphazardly measured, however it could also be that the early prototype, if there was several, was bigger than the final production piece. I marked the red line (both being the same size of course) to roughly show that the comparison should be pretty accurate (albeit still crude), since P1 Guts stands 73 cm tall to the top of his head, which should be 2 more than the total height of F4F Guts.

Unless I've made some critical error this should be the final comparison I'll make for these two statues, unless something tremendous happens to F4F's production run. 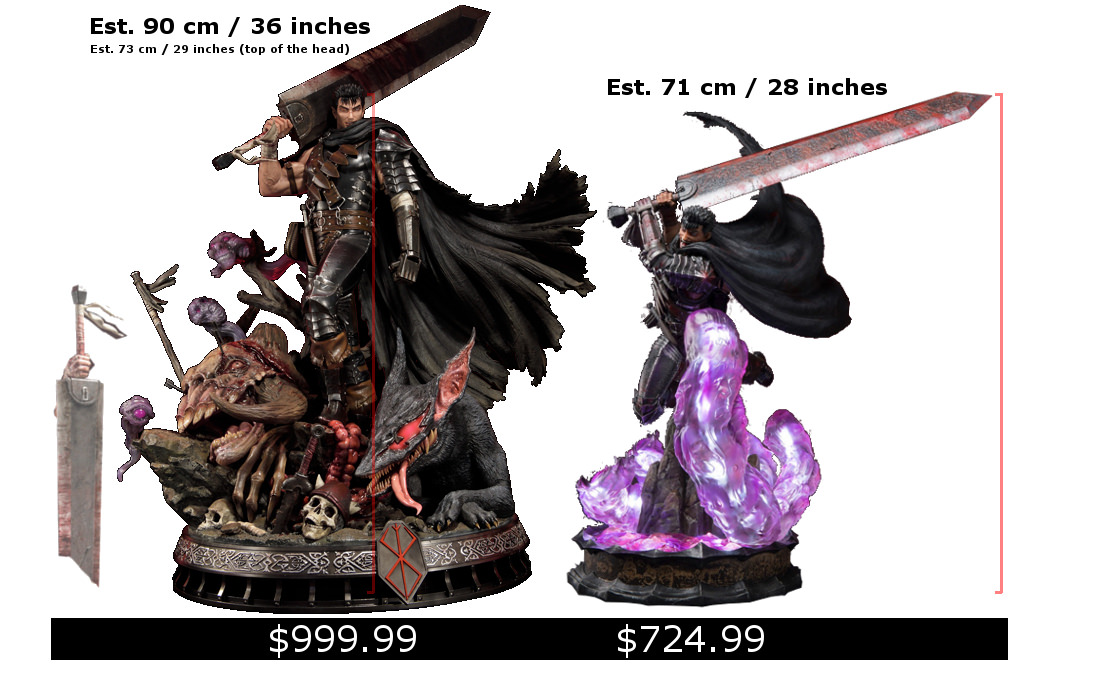 Hope someone else takes interest in these comparisons, anyway, tally-ho.

Cancelled my Bloody EX. It's for the best. The statue is decent, but I don't have the room it.

MustardDragon said:
Cancelled my Bloody EX. It's for the best. The statue is decent, but I don't have the room it.
Click to expand...

No one will judge you, we aren't all DirektDK after all!

Zurth said:
No one will judge you, we aren't all DirektDK after all!

LOLLLL Man, I have no space either. The struggle is sosososo real. Haha.

Zurth said:
No one will judge you, we aren't all DirektDK after all!

Been a long while since the last post but just bumping this to let people know that orders for all versions close on Friday (after tomorrow)!