Avatar made in mspaint

Aolsier was the previous owner of the DS. Godot managed to rescue the blade and run away with it after being sentenced. Then I wonder; Would someone who had been able to wield such enormous and destructive blade, powerfull enough to hurt and kill a Dragon, be satisfied with some other sorry excuse for a sword?
If he is indeed returning, I wonder what kind of weapon will be under his possesion then... Something similar to the DS? Something even bigger and stronger?

I, for one thing, wouldn't want nothing even a bit less powerfull for a replacement after wielding the DS... Nor would Guts I believe. If he ever lost the DS, he would forever miss it and long for something of similar capabilities and power. I think it is natural to think that Aolsier would also, and by now he has had a lot of time to find a suitable new weapon.

Then again, the DS has become cursed/enchanted/impregnated and specialized at what it does: killing apostles and specters. So Aolsier might want it back for it's new capabilities... or even for just the heck of it. He might offer a trade, or even challenge Guts for it.

If such a confrontation between DS-Guts and NewWeapon-Aolsier ever happened, one thing is certain...

The man with the biggest sword will win

"It is pure Potential"

I may be going by a bad translation here, but didn't Zodd tell Guts during their first battle that "no man has evaded my sword this long in fifty years" ? Could he have fought with a young Aolsier? I'll admit, it seems doubtful; Zodd isn't the sort to let any opponent leave the battlefield without a compelling reason. Perhaps Aolsier also carried a Beherit (an ordinary one), and Zodd decided to leave him to his destiny since his fights with apostles weren't satisfying.
F

Aazealh said:
Before the Berserk's armor I'd have said no, but now... Maybe.

Good question, but what purpose did that serve then? I don't think he only planned to kill a single "dragon" (apostle?). I'm curious as to what happened to him afterwards. SK seems to know of his existence, so the more I think of it the more I'm believing he'll show up in Elfhelm. Training Guts with the DS so he can take up the God Hand.

Actually, why not. We've never seen or heard anything about Guts' father, and Guts' strength is incredible, beyond that of humans. If Aolsier is really the king of Elfhelm then that would make Guts an elfman, a theory that was pretty popular back in 2001.

The more we discuss this, the more I think it makes sense. I think we're on to something here.

Hmm, but who? Maybe he's lying in wait for something to happen? You're not thinking of Ganishka, are you? Maybe he would have ordered the DS created to fight against Griffith?

But do you remember Puck's strange reaction when the king of Elfhelm was mentioned? He stayed silent when Isidro and Ivalera teased him... It was very strange, I think he knows something he's not saying. Maybe he doesn't want Guts to discover the truth for some reason.
Click to expand...

Hmm . . . Maybe that's it? Maybe one of the biggest reasons Puck has been following Guts around through thick and thin is because he actually knows that Guts is Aolsier's son? Maybe he even picked up on it right when, or not long after they first met and he immediatly knew Guts had to be his son because Elfmen are so rare?
B

Not to take this too far into the realm of unjustified speculation, but if Aolsier did have a desire to fight apostles, and was successful with the DS (slaying a "dragon"), wouldn't it already have had the qualities that it supposedly became endowed with after Guts used it to slay so many apostles and lesser creatures? Of course, this would make some sense, at least in explaining why Guts had so much success with it early on, as I don't think (and I'm probably wrong) that Black Swordsman era Guts was THAT much superior in ability to Guts when he fought Wyald, for instance. Now, the DS is far superior in size and construction to Guts previous sword, and Guts mentality had changed, I know, but I think it's a question worth considering. I mean, at the very least, if Aolsier HAD slain apostles with it, why would he want it back for "new qualities" that it already had, albeit in lesser degree?
F

Cant you see ? Aolsier is Zodd!

Sorry i had to

Aazealh said:
We've never seen or heard anything about Guts' father, and Guts' strength is incredible, beyond that of humans. If Aolsier is really the king of Elfhelm then that would make Guts an elfman.
Click to expand...

it totally makes sense if we assume that grunbeld knew of guts' family tree or somehow felt his aura that's like aolsiers and then challanged him directly not out of pride but for revenge, sinde guts' father killed his mother.
it's a family-thing...
B

The speculation here is so thick you can cut it with a sword...
D

I wanted to say the same thing, but decided not to.

@Judo: or maybe he just recognized the DS?
F

Didn't Grunbeld take note of how unusual The Dragon Slayer was though? I remember that he was impressed by it's strength. As though he had never encountered it before.
B

Im sorry I seem to be completely lost, what volumes does he appear in???
T

berserker88 said:
Im sorry I seem to be completely lost, what volumes does he appear in???
Click to expand...

On the idea of King Aolsier and King Hanafubuku being the same person: I'm wondering which came first, if Hanafubuku/Aolsier was a Human King of Tudor who became a Demi-Human of some form, why would he trade being a Demi-Human King of Tudor for being a Demi-Human king of Elflhelm? Wouldn't it be more in keeping with his nature to remain amongst his own kind? It also doesn't make sense as I'm willing to bet that The King of Elfhelm is much older then that. What was he doing in Midland in first place though? Did he get bored? Maybe he was on a Crusade?

One thing that's really odd about this scenario is that King Aolsier/Hanafubuku had Godo imprisoned for creating the Dragon Slayer . . . That doesn't seem in keeping with anything that we know about Elves and what they are supposed to represent in the Berserk World. I'm wondering if maybe King Hanafubuku was forced to imprison Godo to save face but deliberately made it easy for him to escape from his Dungeon?

Staff member
Ok, the thread has run its course, now it's time for closure. 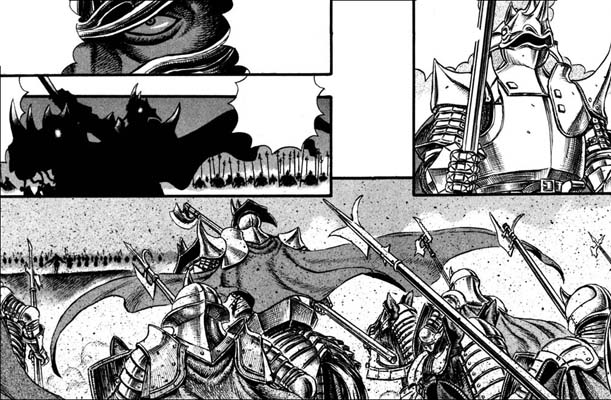 A scan of the missing episode, prior to when Aolsier got the DS. Pretty cool, eh?