Ways in which Berserk has impacted your life

I'm sure most people on this forum are in agreement that Berserk is the most (or at least one of) powerful and life-changing stories we have experienced.

I have my own examples I will probably post later when I have some more time.

How has Berserk made an influence on your life? It can be as deep or as trivial as you feel like sharing!

Trapped in time. Surrounded by evil. Low on gas.

I can talk about many ways in which Berserk has impacted my life, but the main one is that it gives me strenght.

I know it's fiction, but the whole thing about a human overcoming everything, against all odds, fighting monsters outside and inside of himself. He gets hurt every step he takes but he keeps advancing.
Even with the Berserker Armour, he is losing sight, hearing, touch, I guess he can't even take it off by now (maybe they will do something about it now that they are on the island, but hey, he went through it anyway)
I love that about Berserk, I find it very powerful and it helps me, it motivates me a lot.
I'm getting all teary eyes and shit, damnit man!

Yeah, that's an awesome response. Berserk/Guts definitely does similar things for me.

I think the fact that Guts is vulnerable and compassionate

makes his moments of strength that much more impactful.

I've always felt that this panel does a great job of summing up a lot of what you're talking about. 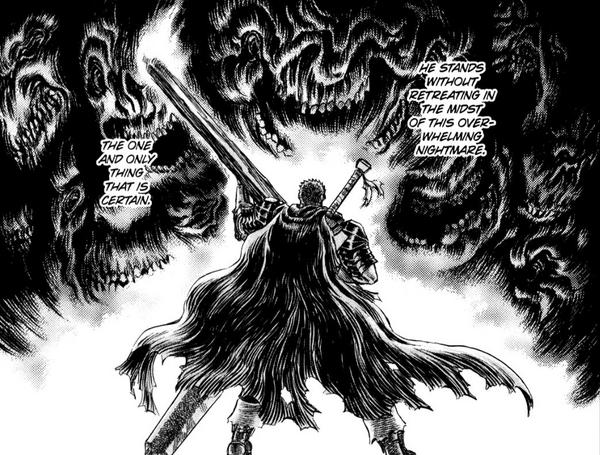 Berserk has influenced me more than any work of fiction, it sounds cheesy but seeing everything Guts has gone through puts my own problems in perspective and gives me strength to carry on.

Guts as a character really resonates with me, I've gone from abused child to edgy teenager to stoic man trying to find purpose in life and most of my interests happen to connect with the surface level themes in Berserk. I regularly train with medieval weapons (HEMA), lift heavy and train my girlfriend for disabled strongman events so I know a lot of very strong people with prosthetics.

On an intellectual/artistic level Berserk has inspired me to create a lot of art, learn about writing and media analysis and take a greater interest in history and psychology.
G

I will never forget when I sat curled up in my ex's lap and almost couldn't watch the Eclipse in the 1997 anime version... I had to keep my eyes closed. >.<

I was introduced to Berserk quite late, in 2015, and since that I've realised it did not began with an animated show but with a comic, so now I'm struggling to acquire the entire comic.

Well, Berserk is very motivational manga for me! Fighting against all odds, not giving up, not becoming wrongdoer and not losing your sanity even if you have reasons to. That's very rough story, with strong impact especially with my own real life passion where I need to not only believe in what I'm doing but also act upon it even more and transcend my own limits of pain and strength. It also helped me to get more into seinen manga like Vinland Saga, Vagabond, Shamo and good few others. It definitely broadened my interest in culture spectrum and got my interest into some artists that could've inspire author of Berserk. With its philosophical themes it forced me into heavy philosophical thinking and even God. What Miura wrote about what would be a true friendship is very interesting even if it's not always applicable in our own existential microcosms.

I really like Berserk's central theme of struggling forward despite the odds. To continue resisting even if fate itself comes in your way. And while none of us will ever have an intense physical struggle like that of Guts, that fact doesn't belittle our on struggle in any way. One of my favorite quotes/moments from the series is when Jill insists on joining Guts, and he dismisses it by saying that he has his own battlefield, and she has hers (from episode 117). While he was addressing her, I felt that what he said applies to the readers as well. Even if your battlefield isn't a constant bloody sword-swinging struggle against death, but is instead something more mundane like academics or relationships, it still is your battlefield, and Guts's struggling ideology applies just as well. It helps me when I'm feeling incredibly beat down.