Staff member
12 hours of the game are on YouTube, for those who are interested in the game's cutscenes: https://youtu.be/piK7rt8x-6A

Fight with Grunbeld looks great. Horse riding is ridiculous, so is killing hundreds of enemies. Some scenes are decent, like Skull Knight with his Beherit Sword, but in some scenes there are changes in appereance of characters, for example when Guts was about to leave Falcons, they were just looking different in manga, Griffith has armor in game, not like in manga. I'm still positive, because we will have some new scenes like Falcon-Zodd confrontation.

Thanks Walter. I'm going to be honest, it looks fun from what I've watched. I enjoy playing those types of games from time to time, and although some things look pretty ridiculous, I am going to take for what it is. I think I'm most looking forward to fighting the boss battles, it looks like they put a decent amount of effort into them.
D

This game is pretty fun. Boss fights are challenging in hard mode. 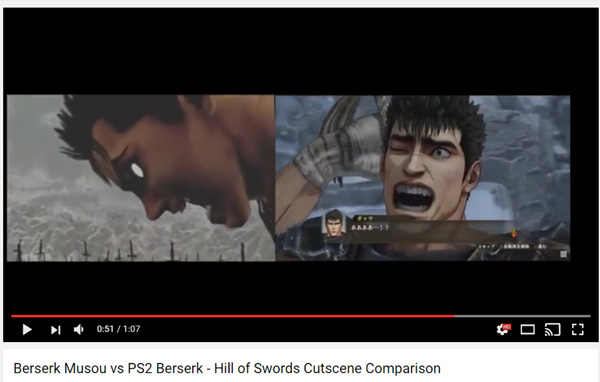 Musou's character models look great but the cutscenes that weren't pre-rendered are rather janky and awkward. I had to laugh at how they handled Ganishka's proclamation of war; the crew standing around in a courtyard asking Farnese to come back and he just pops up from behind some buildings all like, "Surprise, motherfuckers!"

I didnt reach the hill of swords moment yet but what the hell. No white eye Guts in PS4? and iit doesnt look like a cutscenes its just an event.
I just found this in YT.I like how they made it tho.

https://m.youtube.com/watch?v=PErllI-RVRs
Also this game is way more faithful to the manga than the movies and animes :(
D

I have two questions for those here that have gotten their order of the game. How does Berserk Band of the Hawk compare to past Berserk titles pros/cons and secondly what is your view of the game in its translation of the manga versus past titles.

Unfortunately, I'm not a big fan of this style of game, and though, as Walter points out, the boss fights resemble Dark Souls, I'm betting they don't play like it and I'd have really preferred that style for the game overall (considering the comparisons between the two how cool would a Dark Souls knockoff have been for a Berserk game). Anyway, I'm still curious to see how it's received, it could be fun to drop into these iconic fights and the style of gameplay at least fits the larger battles and campaigns from the series (but that's only a few, at least from Guts POV, after the Golden Age).
D

Some of the bosses models look amazing, but Ganiskha looks really bad, he looks like he's come out of a ps2 game.

Boy oh boy Griffith is fun to play as!

I couldn't contain myself when Guts screamed in the Musou game. He can't decide on which emotion to use. His face says sad, but his voice says rage.

Hahahaha oh god they couldn't even get his facial expression or scream right. Did anyone else see the fight with Slan? She doesn't even rip his armor off, he still has it on after the fight...... Yeah I also prefer the ost of the ps2 game over this one. I'm sure the game will be fun but of course it would have been great if they could for once get something right.
D

I like the soundtracks of this game too, they are futting the style of Berserk, epic a medievalish. The only thing I didlike they didnt involve Susumu Hirasawa making a one or 2 songs
D

Mozgus theme is really cool and it sounds relagious too.

I really like the soundtracks of this game
https://www.youtube.com/watch?v=lpyEUq-_usg

Demon Knight said:
Mozgus theme is really cool and it sounds relagious too. That screen shot is hilarious but I also really fucking hate that stupid Rape Horse meme shit. I can't believe they used Schierke...

Koei Techmo are a bunch of trolls.

Lol that horse is weird.


Im buying the western version of this game to support Berserk