Is Griffith a SINO?
Savior In Name Only

All you need to know is that picture is less frightening than the ad, which was described as "psychedelic" and "terrifying."

[quote author=NbcMiami]The original Terminator looks like he wants to terminate the opinion that Florida is the most desirable tourism destination in the nation, so he told a group at a convention in the Silicon Valley that "Florida is known for its old people."[/quote]

Police in New Mexico found a body buried in someone’s front yard last week, which no one would care about at all, except that front yard once sort of belonged to Christian Bale. Says TMZ:

We’ve learned in 2008, while Bale was filming “Terminator: Salvation” in Albuquerque, New Mexico, the body of Michael Snyder lay in the front yard. Snyder had been missing for 8 years … buried at the home the entire time. The body was discovered last week, after cops received a tip. Snyder’s ex-wife has been arrested and charged with murder. Bale obviously had no idea the body was in the yard.
Click to expand...

When reached for comment, Christian Bale said he had to return some video tapes. 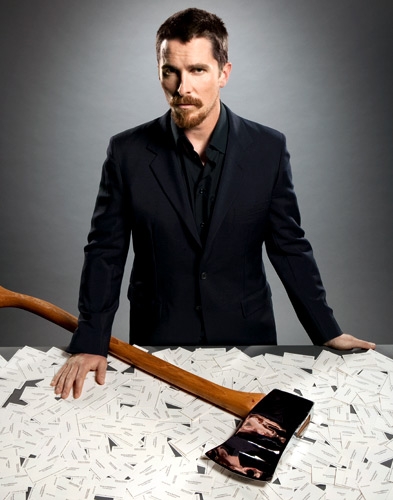 Check out the video in the article. Straight out of an espionnage movie. Kudos to the police for piecing it all together.

Is Bleach being copied and passed off as an original American comic called Incarnate by Nick Simmons, son of Gene Simmons?
Click to expand...

Maybe he should have traced Berserk, at least then his comic would look good.

Check out the video in the article. Straight out of an espionnage movie. Kudos to the police for piecing it all together.
Click to expand...

man, that's kinda freaky even watching stuff like that. I bet they were a little nervous when the other people got in the elevator too.. not for a particular reason but just mighta been a little awkward.

turkitage said:
I bet they were a little nervous when the other people got in the elevator too.. not for a particular reason but just mighta been a little awkward.
Click to expand...

Yeah I think they were. It's the kind of plan that you don't want to fail, and they obviously can't just kill bystanders. Operations like these obviously mean an insane amount of pressure for all those involved.

And he even tries to make money with it...

Aazealh said:
And he even tries to make money with it...

Good news however, his publisher is investigating the claims of plagiarism and halted all future production.

Radical Publishing has stopped production of its comic Incarnate while it investigates growing accusations that creator Nick Simmons plagiarized Bleach and other popular manga series.

The allegations against Simmons, son of KISS frontman and reality-TV star Gene Simmons, emerged at the beginning of the week on the GameFAQ forum before gaining steam Wednesday on fan sites and LiveJournal. The latter link presents perhaps the best visual support for the Bleach claims.

The Wikipedia entry for Nick Simmons now includes a section detailing "Accusations of Plagiarism" that lists eight manga -- the insanely popular Hellsing, One Piece and Vampire Hunter D, among them -- and an amateur artist from DeviantART. There are assertions that, in addition to panel compositions, character designs and poses, Simmons lifted dialogue and "plot segments" from other works. A group calling for legal action against the 21-year-old Simmons has begun on Facebook, where some members have declared today "Bleach Protection Day."
Click to expand...

So being an uncreative hack on deviantart is a crime? And I thought justice didn't exist.

Vampire_Hunter_Bob said:
Good news however, his publisher is investigating the claims of plagiarism and halted all future production.
Click to expand...

I bet there's a lot to investigate!

I thought this was an odd story, first the picture, headline, and tease that was on the Yahoo front page: 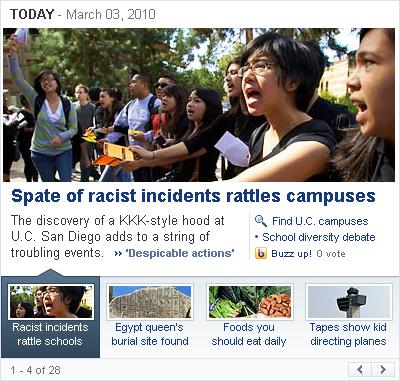 http://news.yahoo.com/s/ap/us_black_history_mock_party​
Sounds pretty damn serious, right? Like we've got helter skelter on our hands, but if you read the article, it's kind of sensational and... desperate.

The protests came on the same day UC San Diego announced the discovery of a white pillowcase fashioned into a KKK-style hood — the third racist incident around the campus in as many weeks — and a day after UC Santa Cruz officials found an image of a noose scribbled on the inside of a bathroom door.
Click to expand...

The third racist incident "around" the campus in as many weeks! That might be the best example, mixed with a genuine "racial incident" (boy is that a lame euphemism), there's stuff like the noose doodle in a bathroom stall at UC Santa Cruz... uh, I'm going to need more context than a noose scribbled on a bathroom wall to report a "racial incident" in the newspaper, let alone relate it to one hundreds of miles away. Was there also a sexual harassment incident in the bathroom involving a cartoon penis?

Although UCLA students said no racial incidents had occurred recently on their campus, in 2007, a fraternity held a "Tijuana Sunrise" party that mocked Mexican-Americans with stereotyped images, they said.
Click to expand...

In other news, there was a racist "Toga Party" invoking Greek stereotypes. At least at one point the article does point out that most of these things, if they aren't even more innocuous, amount to shock value:

The incidents are disturbing and most likely the work of "outliers" using offensive and outrageous behavior to gain notoriety, said Brian Levin, director of California State University's Center for Study of Hate and Extremism in San Bernardino.

He said surveys show young people are less prejudiced than ever, but "these things touch a nerve, and these folks know it."
Click to expand...

The same thing could be said about this story.

Anyway, when you're using the entire UC system as your "who" and "where," that's a humongous and diverse pool of people, separated by thousands of miles, all over the state of California. You could probably come up with any story or angle you wanted in all that, and actually, I think it's strange they couldn't cite more, and better, examples of racism (like actual discrimination). It's not that I'm being totally insensitive, I think some of these situations, like the one where the statue was defaced, are worthy of their own article. What I object to is how they're tying isolated incidents together to stretch the story into some kind of sensational epidemic of racism, which just doesn't hold water, and only dilutes the actual newsworthy events that are included. It's like if on one campus there was a major break in and robbery, that's a story; but, then you add that at another campus someone's laptop was stolen, and somebody couldn't find their iPod, and elsewhere someone's backpack went missing, resulting in an article with a tone like, "flurry of thefts rocks UC system!"

Yeah, right, it's anarchy in the UC, I even found the symbol on the bathroom wall.

グリフィス said:
Was there also a sexual harassment incident in the bathroom involving a cartoon penis?
Click to expand...

Staff member
I never thought I'd see such sloppy journalism from Yahoo! News. I feel betrayed.

Can you imagine the Water Temple...

PS: This thing just jumped to the front of CNN, wow.

Aazealh said:
I never thought I'd see such sloppy journalism from Yahoo! News. I feel betrayed.

Ha, well, the site it appears on aside, I'd like to be able to have more faith in stories from news agencies like The Associated Press. Then again, considering some of the stuff you'll find on CNN these days...

Can you imagine the Water Temple...

PS: This thing just jumped to the front of CNN, wow.
Click to expand... 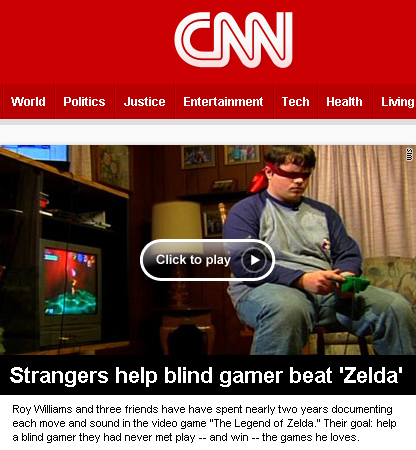 Wow, you weren't kidding.​
Fuckin' Ocarina of Time, man. This definitely adds to its legacy as a preeminent "must play" title.

グリフィス said:
Ha, well, the site it appears on aside, I'd like to be able to have more faith in stories from news agencies like The Associated Press. Then again, considering some of the stuff you'll find on CNN these days...
Click to expand...

Yeah, my point is that all these websites rely on sensationalism for page views. Walter certainly has more to say on the topic, but as far as I'm concerned journalism really isn't what it used to be.

Aazealh said:
Yeah, my point is that all these websites rely on sensationalism for page views. Walter certainly has more to say on the topic, but as far as I'm concerned journalism really isn't what it used to be.
Click to expand...

I can summarize my perspective in a few words: It's all about the clicks!

Yeah, it's too bad, it's one thing for yahoo to pimp articles that way, another for the articles themselves to pander like that.
O

South Korea was in shock today after police arrested a couple Wednesday for child neglect that allegedly caused their 3-month-old daughter to starve to death. The husband, 41, and wife, 25, were addicted to online games, spending up to 12 hours every night at Internet cafes, police said.


"They called in last September to report that they found their daughter dead after coming back home in the morning," Det. Chung Jin-Won of the Suwon Seobu Police Station said. "They had spent 12 hours, all night at a PC bang."

Sigh just great......More great publicity for gamers. Stupid people like this ruin it for everyone.

Staff member
Why couldn't these retards at least play on their own computers? You'd think if one was going to spend 12 hours a day playing a game he'd get his own rig instead of renting one.

Police found thousands of items of stolen property, brand new and still in packaging, during a search warrant of a Red Deer home.

Two people have been charged in relation to the find of stolen goods earlier this week which included DVDs, televisions, furniture and computers, but police said they believe it may be part of a bigger operation linked to thefts across the province and into B.C.

Red Deer City RCMP Const. Sabrina Grunow said part of the ongoing investigation will be to determine where the property, valued at about $100,000, came from and where it was destined to be sold.

“All the property was new in original packaging, we are looking at a lot of property,” she said Wednesday.

“We are still looking at locating other property, we’re not done by any means.”

Among the goods found in the home on the south side of the city were more than 2,600 DVD and Blu-ray discs, video games including Wii and Xbox 360 games and computers.

“There were boxes and boxes of stuff,” Grunow said.

“There were TVs, furniture and a table and chairs still in the box.”

“I don’t think anybody can say 2,600 DVDs are for a personal collections,” Grunow said.

“We are still looking at where all this stuff was destined for.”

The accused are said to be romantically involved.

Ricardo Hudson, 30, is charged with various possession of stolen property charges, possession of break-in instruments, and remains in custody.

Carla Chilton, 23, is charged with numerous possession of stolen property charges, and possession of break-in instrument charges.
Click to expand...

My older sister bought blu rays off that bitch Chilton on eBay.

Aazealh said:
Walter certainly has more to say on the topic, but as far as I'm concerned journalism really isn't what it used to be.
Click to expand...