Staff member
One more new one, for good measure:

(say goodbye to this chump:

All the new emoticons are cool Thank you, Walter.
Of course, I love the Rickert emoticon so I want to use it often! If I had to create ranks for the forum, it'd be the highest, the Slapper!
But to whom? in what case? That's the problem.

Amazing how much pure sadness you can pack into one 20-pixel box.

I feel like we're being a bit spoiled here, thank you!

Grail said:
Amazing how much pure sadness you can pack into one 20-pixel box.

Aside from Rickert, these newer ones have sat on the shelf for too long and were pretty much ready to go.

looks cool for something in the Horror movie thread.


Grail said:
I don't think I'd have the heart to slap anybody, though.

Yeah, which makes it a good challenge and won't be used a lot, unless ...

It's episode, not chapter.

looks cool for something in the Horror movie thread.
Click to expand...

You want horror?! I got horror!

Forgot to show the drafts of that new Judo:

Walter said:
You want horror?! I got horror!

That witchy Flora! Chuckled hard when I saw it, it's brilliant and yet far from the saintly Flora carrying that gentle smile. Perfect emoticon for The Blair

Forgot to show the drafts of that new Judo:

Staff member
Which character would be most suited to represent ¯\_(ツ)_/¯ ?
W

Maybe Void because long arms? But he doesn't have facial expressions.

Staff member
Yeah, sorry as I am to say it, but Void isn't very expressive.

Grail and I are pretty sure there's a great panel of Judo shrugging, but I can't seem to place it.

Walter said:
Yeah, sorry as I am to say it, but Void isn't very expressive.

Grail and I are pretty sure there's a great panel of Judo shrugging, but I can't seem to place it.
Click to expand...

I found a couple of him shrugging, but I don't know if they're what you're thinking of. 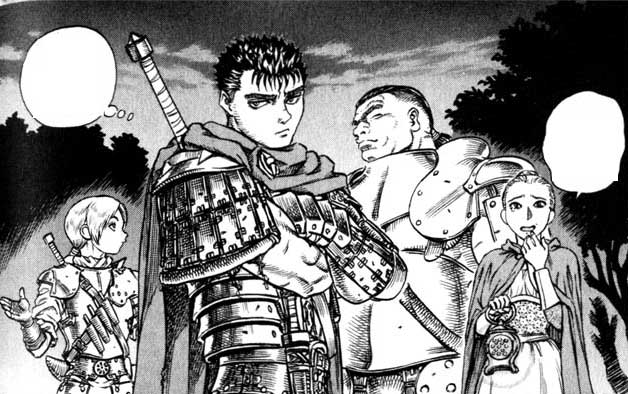 I think Luka could possibly work. 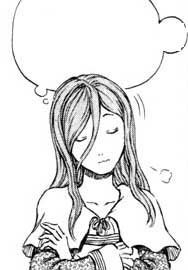 Now, I know it's not clear if she's actually shrugging here, but I like her expression, and it a good "shrugging moment," what with her deciding to drop her current thought about the Beherit Apostle while huffing that she's not a main character.

[Tries to type a shrugging emoticon. Realizes, to his horror, that there isn't one.]

I had also thought of Luca but Cyrus beat me to it before I had a chance to post. I can picture her shrugging with a slightly tilted head and a lock of hair partially covering her eye, or something like that.

Possibly characters with a somewhat smug attitude, like Rochine or Morda.

Staff member
Please welcome our latest addition to the family:

Thanks to Grail and Aaz for helping me fine-tune all the iterations! Not a joke, I realized we sorely needed this emoticon when I was trying to find the right one to describe how I feel about Bloodborne.

(around this point, I said I was "pretty much done.")

Hail to the king of the pillow and pill

but that isn't grass.

I know that I know :) said:
Ok final idea an emoticon relating to the vortex of souls being flushed down a toilet
Click to expand...

That would probably be very difficult to convey recognizably within 20x20px. Also, circular animations in general won't work well with these. Check out how the other animations have been done. That's pretty much the scope. May as well just make a normal image for something like that.

or how about an emoticon relating to Guts cannon arm firing.
Click to expand...

Not disparaging, but what would the context be for using that?

The grass will be back as it comes in many guises. The grass shall return as it has in the days of old for now it rests gathers its strength and when its ready it will rise from the depths and become a emoticon maybe probably not.

Walter said:
May as well just make a normal image for something like that.
Click to expand...

Walter said:
Not disparaging, but what would the context be for using that?
Click to expand...

"Well you there is a very simple explanation the context is that....SMOKE CAN!!!!" Walter covers his mouth and eyes from the fumes and begins to frantically look around the room and sees the open backdoor takes out his trusty dragon slayer (made out of cardboard and plastic) and ask himself this one question"how this guy got in my house and what is a smoke can?". In all seriousness I just thought it would look cool and didn't think about what context if any it could be used in

I got it an emoticon with skullknight saying oops with wide suprised eyes relating to when he caused fantasia by slicing ganshika with his Sword of Actuation maybe to end it off,the emitcon will be covered in white light signifying the explosion kind of like

.Wait a minute where is skullknight anyway?

Damn dude, you're on a roll! I'm seeing a theme here. What's next, more hand gestures? Molda flipping the bird?